The 2013 play by C. Denby Swansen, The Norwegians, has arrived in Tucson. Should you care? In a word, yes. If you want to laugh pretty much non-stop for 90 minutes, this is the best ticket in town.

Don’t look for penetrating insights into the mindset of any of the four characters here, as Swansen applies a broad brushstroke in his delineation of their portrayals. The cast consist of two guys from Minnesota, with an exaggerated accent that is supposed to be a mix of Norwegian and Minnesotan. They are actually nice ‘hit men’ who have a very special rapport with the two female characters.

But first, the guys. Tor (played Keith Wick) is the manager of the 2-person team that can be hired to rub out unwanted boyfriends. The one who actually wields the baseball bat (no gunfire here) to send people to the great beyond is Gus (Stephen Frankenfield). Sounds like a violent play, but as I said, they describe themselves as nice hit men. Both characters are a bit dim-witted.

The lights in the minds of the two female characters only burn a little brighter. Texas native Olive (played by Avis Judd) finds trouble fitting in to the lifestyle of Minnesota (which Norwegians admire for its bravery against cold and snow). Her sole companion is Betty (Samantha Cormier) who is a transplant from Kentucky. Betty has already employed Norwegians to rid of one ex, and she plans to hire them again for her latest ex, so what would be more natural than Olive deciding to hire a couple of Norwegian guys to kill her nasty BF too? 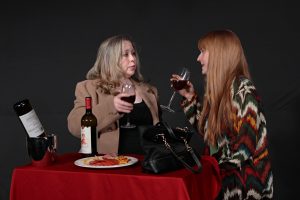 One of the best passages in the play is a soliloquy by Betty on the perils of Minnesota nights, which are especially long at this time of year. She advises Olive to find a lover to stay warm before it’s too late! That doesn’t go too well, as Olive decides a permanent solution to her problem (the nasty BF) is the only way she can truly be liberated. “I am finally a REAL TEXAN. We shoot things!” she shouts. Keeping in mind her earlier stark admission that “Texans are bullshitters,” I’ll let you draw your own conclusions about her state of mind.

Levening the situation are the Norwegians, who inform the audience that people in Norway invented baseball and many other things that will come as a surprise to an American audience. I especially liked the reference by Tor to the Norwegian High Council. “Is that something on Star Trek?” asks Gus. “Is that the Vulcan or the Cardassian High Council?” Like I said, dim witted, but anyone who uses Star Trek in a play is OK by me.

Offbeat and fun, The Norwegians is acted with all the moral vacuity it deserves by these four very fine actors.