The University of Arizona has just acquired the photographic archives of one of America’s foremost photographers, David Hume Kennerly. They will be housed at the Center for Creative Photography (CCP).

In an event at Centennial Hall, Kennerly was in conversation with Jon Meacham, the presidential historian. Both men have won the Pulitzer Prize, so this was a conversation between peers.

Rather surprisingly for a historian who relies on the written word, Meacham stated “photography is more valuable than oral histories. Imagine of we had photos from the Constitutional Convention,” he mused, referring to the meeting that resulted in the US Constitution. Having a record of the body language and facial expressions of the founding Fathers is what is missing from the historical record.

Kennerly, who won the Pulitzer in 1972, stated simply that “the reason I take pictures is so people can see them, and to create a record” of historical events. He told the audience in Tucson “my first major assignment was to cover Robert Fitzgerald Kennedy in 1966, on a trip to Portland, Oregon. A photographer travelling with Kennedy let me get up on stage with the senator.” This proved to be a pivotal moment for Kennerly, who explained that when he watched Kennedy board his plane to leave Portland, “I had the feeling I wanted to be on that plane, I wanted to go where history goes.”

He certainly got his wish, having taken photos of every President since, but it was his connection to RFK that resonated most strongly in Centennial Hall, because Kennerly was here in March 1968 to photograph Kennedy during his appearance at the Hall. “Two months later I was at the Ambassador Hotel. I talked to Kennedy and went downstairs to cover the election rally.” Instead he photographed his wife Ethel sitting in an ambulance in state of shock after the assassination. “This picture made me feel really bad,” Kennerly said. “But years later she told me not to feel that way. ‘You were just doing your job,’ she said.” It turns out the photo he took of Kennedy at the podium in the hotel was the last one ever taken of him alive.

Kennerly said that key to his success as a photographer has been “retaining the trust of the subject.” This has let him to snap iconic photos, such as First Lady Betty Ford dancing on the cabinet table of the White House. He described Betty as “one of the greatest human beings I’ve ever known.” Kennerly got the job of press photographer for Pres. Ford by being bold. He told Ford he would only accept the job under two conditions: “I want to report only to you, and I have unfettered access to everything in the White House.” Ford thought about it and replied “You don’t want Air Force One on the weekends?”

The photographer had a great relationship with Ford, but even he pushed his luck too far one day, asking the president “Did you think that by pardoning Nixon on a Sunday nobody would notice? He got really pissed at me.” It was Kennerly who took the iconic photo of Nixon giving his two-handed Victory salute, as he boarded the helicopter that whisked him away from the White House upon his resignation. “It looked like an image from a campaign rally,” Kennerly said thoughtfully, “but it was one of the deadliest moments of presidential history.”

Summing up his photos and recollections of half a century of photography, Meacham called Kennerly “an architect of the Republic.” The 1,800 people at Centennial Hall were all quite privileged to attend this insightful look into many of the great events that have shaped that Republic which is now in such peril.

The event was produced by the CCP and UA Presents, and promoted with TENWEST Impact Festival.

For more events this month in Tucson, visit www.tenwest.com

For more about the Center for Creative Photography, go to: www.ccp.arizona.edu 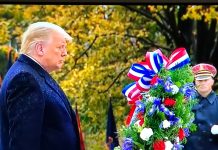