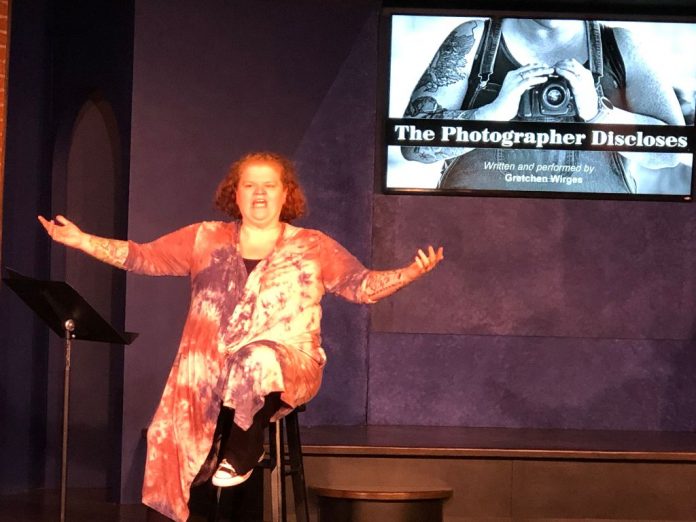 Gretchen Wirges brought her one-woman show to the Invisible Theatre this week, marking its world premiere. Entitled The Photographer Discloses, it is based on her real-life experience as a photographer and storyteller.

The premise is that she asked a group of volunteers, many of whom were her close friends, a series of 20 questions. During the interviews she took candid head shots of their expressions ranging from reflection to joy. “Be as vulnerable as you are willing to be,” she told them. In return she offered to answer any of their personal questions, so in this performance we hear not the responses of the volunteers, but the answers Wirges gave about her own life. It seems a bit paradoxical that we don’t know what questions she asked, and what the responses were. We see a series of photos throughout the performance, but as they are not linked to a specific question, or even type of question, they appeared to me to be simply disconnected images of people emoting about queries we can’t even guess at. But as the title says, it is the photographer who discloses here.

Wirges answers questions such as “what was your most embarrassing moment?”, “what is the best gift you have received?” and “what is your most cherished memory.” The question that touched an especially raw nerve was “what was your relationship to your Mother?” Her response was contained in a rather long letter she wrote, which included “My biggest fear is I will become you!”

Even though the photos are evocative, Wirges says the one she never took “is the one that impacted me the most.” That was of a particularly close friend. “I was afraid I would capture pain, as I knew I would.”

This performance is essentially a love letter from Wirges to her audience. “I hope this empowers you to be brave, be vulnerable.”

As I looked around at the audience during the performance, it appeared that many were thinking ‘If I were up on stage, what life experiences would I be telling?’  Everyone has a little raconteur in themselves and viewing this performance might just spark this inner self to be shared.

At the end of the performance it would have been interesting to have the audience each give one question that they would have included if they were on stage themselves.

Here are some upcoming shows for the 50th Anniversary of the Invisible Theatre: 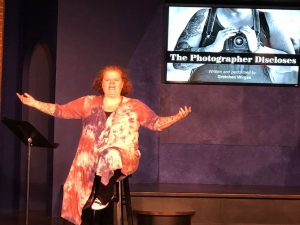 Desire Under the Elms

A Murder Mystery in Tucson