One poster features the film Zombie Worlds, presented by “Planets Caught in the Horrifying Grip of an Undead Star.” Another poster touts the film Rains of Terror, by “The Nightmare World of HD 189733b.”

That is actually a real planet with an atmosphere full of silicates, with mild winds of only 5,400 mph. NASA says that “at those speeds, the silicates whipping through the air might create a perpetual storm of flying glass. If human or robotic explorers could travel 63 light years from Earth to get there, they would never survive this planetary hellscape.”

How did astronomers find such an exoplanet? That was the topic of a talk last night at Tucson’s Loft Theatre, where UA astronomy professor Richard Poss introduced a screening of the 2016 science fiction movie Arrival.

Poss said the universe has roughly 100 billion galaxies, many of which have 100 billion or more stars. But how many planets are there? “When I started in the astronomy department in 1988 there were no exoplanet discoveries. Now we have information on more than 4,00 planets.”

Key to this explosion of knowledge was the Kepler spacecraft, launched in 2009. “We have been privileged to be alive during the Kepler mission which changed our view of the cosmos as much as the Copernican Revolution did,” he said, referring to the idea Copernicus had in the 1500s that the Sun, and not the Earth, was at the centre of our planetary system.

Based on the small area of our own galaxy that Kepler surveyed, Poss estimates there are 100 billion planets in the Milky Way, or approximately one for every star on average. There is every reason to believe many other galaxies have similar numbers of planets. Even the nearest star, Proxima Centauri B, has a planet. “If the nearest star has a planet, our universe is a lot more like Star Trek than I originally supposed,” he quipped. [full disclosure: the writer of this article appeared on Star Trek: Deep Space Nine].

Poss noted that interstellar communication is limited by the speed of light, making a sharing of ideas almost impossible. But he mused about a fantasy he has that there is a “galactic database” that other civilisations have uploaded all their knowledge to. “All that data is available that we can download.” And of course upload our own database of knowledge for others to share.

The appearance of Dr. Poss was part of the Tucson Humanities Festival, which concludes in early November. Visit www.humanitiesfestival.arizona.edu for details

Photo credit: NASA. The poster was created by Joby Harris at JPL. I shared the stage with him at a panel held 2 weeks ago at the Convergence Conference at Arcosanti in Arizona. 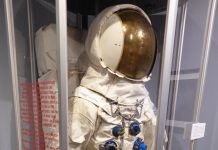 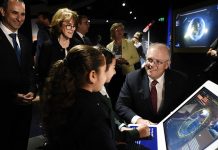