The opera Fellow Travelers, sensitively staged by the Arizona Opera in both Phoenix and Tucson earlier this month, is a curious beast.

It is probably unique in the world of opera for portraying the so-called Lavender Scare of the 1950s, where gay men employed by the federal government were hounded out of their jobs. It received official sanction by Pres. Eisenhower, whose reputation has not been sufficiently downgraded by historians for his shameful actions. It was also propelled by the venomous hatred by Sen. Joseph McCarthy, who has received the proper attention to his legacy by the judgment of history. The opera takes its name from the very words of McCarthy to describe those who were sympathetic to those who did not agree with his own ideology.

McCarthy actually appears in this opera, although his role in the story is muddied by an irrelevant side story about a person he hired who was involved in anti-communism. While it was central to the career of McCarthy, its inclusion here diverts attention from the entire purpose of the opera, which is to examine the effect of the anti-gay efforts of McCarthy and an investigative unit (the M unit) in the State Department that forced men to take lie detector tests to determine their sexual orientation (sounds like something from a totalitarian dictatorship, but it actually happened here).

Is only the fourth time Fellow Travelers has been performed, being the creation of a partnership between Cincinnati Opera and the University of Cincinnati in 2016. Gregory Spears wrote the opera, with a libretto by Greg Pierce. Baritone Joseph Lattanzi was in the original workshop cast of 2016, and has performed the role of Hawk Fuller in all productions since. His co-star here, tenor Jonas Hacker as Timothy Laughlin, is making his second appearance after singing the role in Chicago. Both perform admirably in this perfect integration of music and drama that is both taut and theatrical. Lattanzi is ideally cast as the ultra handsome Lothario, while the younger gay man racked by religious doubt (an assailant just as risible as the M unit) is very convincing in the hands of Hacker.

Even so several people I spoke to thought the opera sounded trivial in English. “It doesn’t seems like an opera, more like a play,” is what I heard several times, with the lack of a melodic line being cited. The high-drama impact of betrayal is not evident here, for example. Just the pointing finger of a female gay-hater takes the place of what in grand opera would be an extended aria of great dimension and force.

The venue was quite good, however. The intimate Temple of Music and Art was much better suited for what is in effect a chamber opera than the large Tucson Music hall. The minimalist set design was exceptionally versatile, and most inventive.

Despite the importance of the message it conveys, the mishandling of the McCarthy character means Fellow Travelers is not ready for prime time. The message of the Lavender Scare gets diluted by the equally important witch hunt for Communists in the government. By all means shorten the production if necessary, but don’t pad it with parallel historical happenings that only engender confusion in the audience. I spoke with one opera goer who actually knew people whose lives were ruined by McCarthy, but for the under-80 set in the audience one witch hunt at a time is plenty.

Despite this I congratulate Arizona Opera for willing to stage new opera, especially on the issue of gay rights as we mark this year the 50th anniversary of Stonewall. The production values were very high and would be a credit to any opera company in the country. Visit www.azopera.org for details of future productions in Tucson.

Lead photo courtesy of Arizona Opera shows haunting images of those whose lives were ruined in the Lavender Scare.

Second photo by C. Cunningham: at centre, Hacker (l) and Lattanzi take audience applause at the conclusion of the opera. 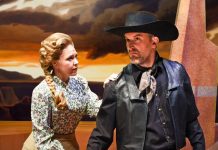