From the rousing introduction of Ring Those Bells, the Ft. Lauderdale audience knew it was in for the finest annual seasonal treat that South Florida has to offer. As usual the Gay Men’s Chorus of South Florida, under the direction of Harold D’Aquino, did not disappoint.

The orchestrated use of the bells was both beautiful and remarkable, one that heralded a multi-cultural musical feast that included tunes in both Hebrew (Ose Shalom) and Spanish (Esta Noche).

The Spanish song, featuring a solo by Eduardo Pinto, was for many the highlight of the concert. His delivery was like something one sees in the finals of major vocal competition on TV. Pinto has the chops for a theatrical stage presence, gracing Esta Noche with the very forceful presentation it demands (see the lead photo). 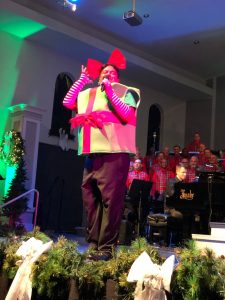 The chorus as a whole, some 127 strong, delivered a harmony that sounded like once voice. This was evident from an early offering in the concert, The First Noel. One person there described it “as angelic, a great blending of voices.”

Dancing was also at a high level, with tap dancing in a silly song from the movie Elf, Sparkle Jolly. Ten members of the chorus appeared wrapped in gift boxes! One of these appears in the photo here. 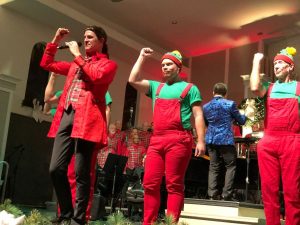 Elves got a special segment all to themselves with a production of The Elves’ Broadway Christmas (see photo). A takeoff on 5 musicals, it was prompted by Santa telling the elves they could not listen to any more show tunes while working at the North Pole. So the elves decided to poke fun on musicals: Phantom of the Opera, Les Mis, Wicked, Hamilton and Rent.

The subset of the chorus known as Tropical Wave performed both a Spanish-language tune and an a capella version of I Wish It Could be Christmas Every Day. As usual they offered delightful vocals, but letting the group be conducted by assistant conductor John McCarty would be advisable. As it is, Dr. McCarty only took the baton for one selection, Our Favourite Son.

The concert had a sombre moment in Somewhere in My Memory, dedicated to an older gay couple in the area who were present at the concert, one of whom got a Community Service award from the Alzheimer’s Association. One of the couple recently spoke at the conference Aging With Pride.

Overall a marvellous way to add sparkle to the holiday season. Visit their website for information on upcoming concerts: www.gmcsf.org 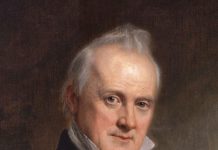 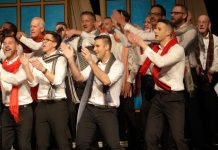 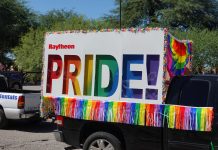