It’s a winning formula: create a musical farce where good is pitted against evil. The Gaslight Theatre in Tucson is currently staging Space Wars, a broad take-off on Star Wars. This is not to be confused with their Star Trek parody from 2019. Both were written by Peter Van Slyke, both sets were created by Tom Benson, and the music for both is performed by a trio led by Linda Ackerman.

Fans of Gaslight will be relieved things are back on track, and we have seemingly picked up exactly where we left off more than a year ago when all indoor shows were cancelled due to the virus. The cast we have all grown to love is also back in Force (or, in this musical, Course). 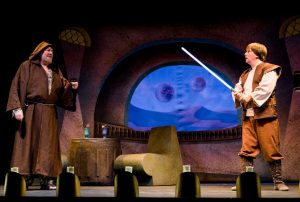 Jake Chapman is his usually ebullient self as a Wookie, Heather Stricker is abominably bad (in a good way) as the evil leader Dark Visor (Darth Vader), the irrepressible Mike Yarema reinvents his good guy Capt. Kirk role as Duke Starfighter (Luke Skywalker) and David Orley in the Obi-wan Kenobe role is a sheer delight.

While this is a Star Wars parody, other iconic elements are thrown into the mix. Attentive watchers will see Jacob Brown as the android C3PO (renamed here MP3PO) do a great impersonation of the robot from Lost in Space – flailing his arms and screaming Danger Danger. Another subtle touch comes from the Wizard of Oz, where the Wicked Witch fades away.

Even though the original Star Wars is from 1977, this version harkens back to the 1960s for much of its soundtrack. I especially enjoyed Orley singing the 1969 Norman Greenbaum classic Spirit in the Sky.

Janee Page as the Princess could have doubled for Carrie Fischer in the Star Wars film, with the perfect Princess Leia hair. Backed up by two Imperial storm troopers, she begins the show with the uplifting tune Don’t Stop Believing (by Journey, 1981). It’s back to the 60s with the Frankie Valli hit Oh What a Night, cleverly reworded here as Galactic Night. And the 70s are not forgotten, with the infectiously delicious Disco Inferno by The Trammps.

Both the costumes and sets for this production are outstanding. We even get to see a full-size Jabba the Hut, and a light saber duel. What’s not to like? The Gaslight is back with the power of the Jedi Knights. And unlike the gaslighting of America we all endured from 2017 to early this year, this is the kind of Gaslight we all need. It also reminds us that the forces of Evil, whether they are in the White House, the Kremlin, or a galaxy far, far away, can be defeated by the forces of Good. 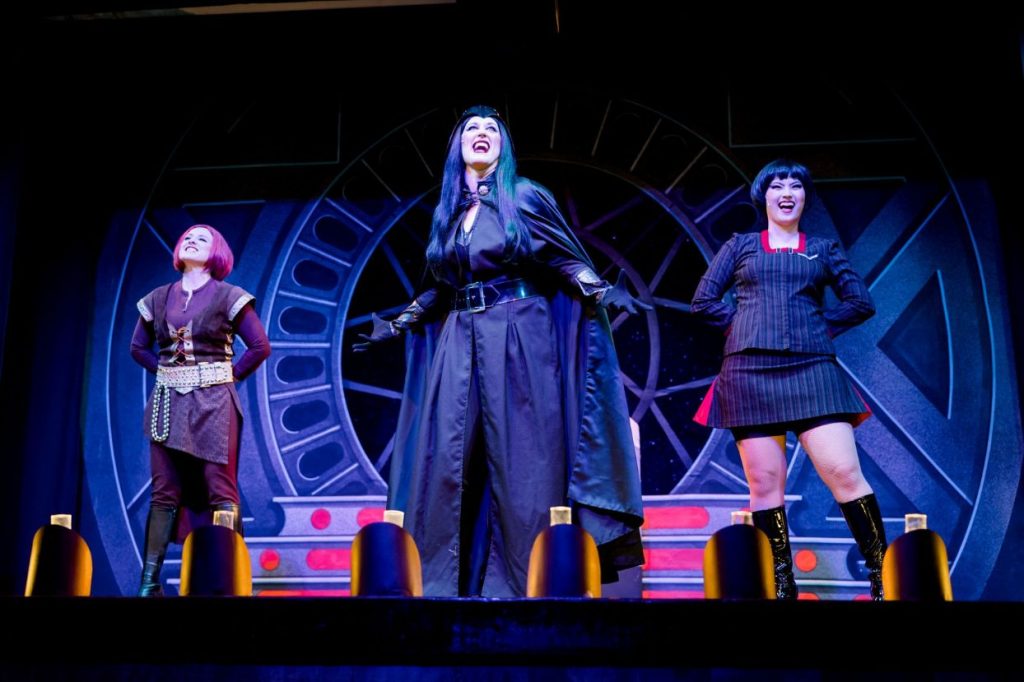 Desire Under the Elms

Christmas Break is Over!

Catwoman on the Prowl