We are all distressed about having to wear masks, but Will Clipman loves it. All for the sake of art, of course.

Tucson resident Clipman, who has won numerous music awards, is putting on a one-man show at Invisible Theatre this week. If you ever wanted to explore what a deep state really is, this bravura performance is for you. No, it’s not about politics and the fake deep state so many believe in. This is an exploration of the deep state of the human mind, going back to a time before time. As a sampler of origin stories from around the world, this is really a 70-minute anthropological masterclass – a true learning experience done in a theatrical setting.

During the show, Clipman donned a series of masks, each one claiming his own persona for a brief time. Instead of ‘owning’ these masks, Clipman regards himself as their caretaker “during the brief flash of a moment we call a lifetime.” Similarly for the ethnic instruments he plays. The udu, for example, is from Nigeria (bottom right in lead photo). It is a ceramic drum, but Clipman’s version is the only one made from Sonoran desert clay of Arizona. For him it exemplifies a “commitment to tradition and craft,” something notably lacking in our fast-paced Western culture.

There are many legends surrounding the honu (sea turtle) of Hawaii. Clipman, in the mask shown in the lead photo, tells of an epic journey of a swimmer who was in danger of sinking from exhaustion. He was surrounded by 8 honu in a protective circle. Once he began to imitate their movements to keep afloat, he was able to return to Waimea Bay. The moral of the story, Clipman tells us, is that “we don’t have anything to prove to anyone else. The only thing that matters is that we do our best.” 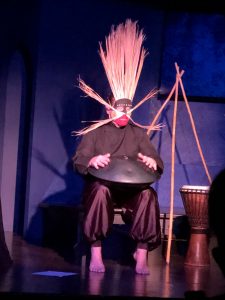 Another tale looks at stars, everyone unique. “But in all that vastness of space they are all connected together.” One of the instruments he uses looks like a spaceship (pictured right). He explained it is called a hang, and was created by a Swiss couple in the 1990s. Each of the instruments he employs delivers a sound that seems to emanate from deep time, a perfect compliment to the origin stories he tells.

A remarkable experience, which unfortunately has its final performance tonite. But for more on Clipman’s upcoming performances and releases of poetry and music, visit his website: willclipman.com

Invisible Theatre has a roster of 3 performances coming up in April. Check out their website for details: