The 10th annual Tucson Humanities Festival (through the month of October and ending Nov. 1) will offer a range of talks and a film to explore how the humanities can shape the world of tomorrow.

I will be reporting on the next lecture in the series (Oct. 7), dealing with women members of the Bauhaus. As a complement to the current University of Arizona Museum of Art exhibit “A New Unity: The Life and Afterlife of Bauhaus,” Elizabeth Otto of the Univ. of Buffalo will be speaking about women in the German Art school that operated from 1919-1933.

To quote the Festival website, “A century after its founding in 1919, scholars and the art-and-design interested public associate the Bauhaus with modernist architecture, sleek avant-garde design, and abstract painting by artists such as Wassily Kandinsky, Paul Klee, or László Moholy-Nagy. But the Bauhaus was much more than the work and lives of the famed few reveal. Perhaps least understood of all are the Bauhaus’s women, who made up over one third of its members. In the photography and experimental design of key Bauhaus women, we see a new side to this foundational movement of modern art, and reach a better understanding of the past to enable us to come to grips with what comes next.” I am printing below an article I wrote about Moholy-Nagy for Sun News in 2015.

Here is a synopsis of other Festival events:

Sandra Cisneros will not be at the Oct 5 event, but she will be appearing at the Festival on Oct. 24

Oct. 9: Beyond the Church: The Digital-Religious Lives of Young Black Christians

With an interdisciplinary focus on the intersection of religious history, technology, and urban black life, Gault shares stories, poems and field notes from a two-year ethnography on digital Black Christians. Her own role as a hip hop and black church scholar-practitioner offers an insightful and fascinating portrait of the largest living generation in the U.S.

Oct. 15: Speaking to Power: What’s Next for Religious Institutions after #MeToo?

How have religious institutions responded to scandals involving sexual abuse of minors and gender-based violence? Panelists will examine these questions in the context of two of the country’s largest religious groups—Catholics and Southern Baptists— as well as case studies involving Latter-day Saints and Jehovah’s Witnesses.

While technology has led humankind on a search through space to evolve its ‘destiny,’ the basis for this exploration comes from the deep-seated desire of human beings to answer ‘big questions’ about their role in the universe. Spurred by the sense of wonder of early philosophers and astronomers, and centered in the original Liberal Arts, our technological forays in the future have been rooted in humanistic practices that have produced great works of art and a fascination for the beyond that continues to permeate popular culture. This lecture provides a brief history of this exploration, and suggests why human imagination, and humanistic inquiries have to be part of any conversation about our future on and off this planet.

The spoken word has always held a special place in the hearts of Russians, from Alexander Pushkin’s revolutionary writings through generations of Russian playwrights, librettists, poets and bards. This vibrant oral tradition lives today in Russian rap. Artists such as Husky, Noize MC, Oxxxymiron, Timati, and Vasya Oblomov are skilled wordsmiths who advance not just the literary form of poetry, but also political and cultural messages. As true at the genre’s inception as it is in today’s oppressive political climate, Russian rap artists’ careers can hinge on taking a friendly or antagonistic stance toward government.

Visions of human flourishing that developed in classical China are among the most complex in world philosophy. Focusing on the inter-relations between anthropology, history, philosophy, and religion, Michael Puett explores these visions in relationship to developments in recent Western thought. Puett places the study of China into larger historical and comparative frameworks, offering new perspective on what theories from classical China have to offer in contemporary discussions.

When mysterious spacecrafts touch down across the globe, an elite team, led by expert linguist Louise Banks, is brought together to investigate. As mankind teeters on the verge of global war, Banks and the team race against time for answers – and to find them, she will take a chance that could threaten her life, and quite possibly humanity. Starring Amy Adams, Jeremy Renner and Forest Whitaker. Directed By Denis Villeneuve. Based on the 1998 Nebula Award winning novella “Story of Your Life” by Ted Chiang. Nominated for eight Academy Awards.

Consult the Festival website for dates and fees; some events such as the Oct. 29 film are free.

What is the best movie ever made? Things to Come is not usually featured on a list of cinema’s finest achievements, but it is my favourite. If you visit the Planet Hollywood restaurant in Orlando, you can see an image from the closing scene of the movie. It is on the painted ceiling featuring iconic images of Hollywood’s greatest movies.

Starring the two great knights of the British stage, Sir Cedric Hardwicke and Sir Ralph Richardson, along with Canada’s most famous actor Raymond Massey, Things to Come is an extraordinary look into the future of space exploration from the vantage point of 1936. Its ending is the most uplifting segment ever filmed. “All the Universe or nothing!”

An unattainable dream? Perhaps, but one was that resonates in the work of Moholgy-Nagy. Here is Eik Kahng, chief curator of the Santa Barbara Museum of Art: “Painting for Moholy was a visionary medium; the only means by which the artist could continue to explore the unattainable dreams he had for an art imagined as immaterial.”

When the makers of the movie wanted the most futurist possible set design they turned to Laszlo Moholy-Nagy (1895-1946), an advocate for the integration of art with technology. In 1930 he had created a kinetic device meant to produce lively light displays for a modern stage, so he was the ideal choice for Things to Come (an adaptation of the H.G. Wells book The Shape of Things to Come).

A 2006 reproduction of this kinetic device is featured in an exhibit devoted to Moholy-Nagy, currently showing at the Santa Barbara Museum of Art.

Much of Moholy’s paintings are on display here, beginning with his iconic Architektur of 1922 (shown in this article). Curator of the exhibit Joyce Tsai says in in the catalogue of the exhibit that “the art and theory Moholy produced in 1922 maintained that art could transform the world to shape the future by habituating the viewer to new, modern modes of perception.” And it was just this concept of “shaping the future” that was the animating principle of the movie Things to Come.

It was the famed film producer Alexander Korda who asked Moholy to contribute special effects to his movie Things to Come. Unfortunately only a few seconds of this work appear in the edited film, but visitors to the Santa Barbara exhibit can see a full 9-minute film of these effects.

A film canister of his unused special effects was discovered in the archives of the Denham Studios in the 1970s. Jan Tichy (assistant professor of photography at the Art Institute of Chicago) has created a synchronized three-channel digital projection that makes use of these clips. Each cycle begins and ends with Moholy’s original. In between, Tichy subjects the film segment to transformations including superimposition and reversals of positive and negative sequences. Visitors can sit is a dimly-lit room to view this, while behind them on the wall are arranged a series of posters for the movie. The museum is hosting a special screening of the film at the end of July.

At the end of his life, Moholy painted a work entitled Leuk 5 (shown here), the title coming from the fact he was dying of leukemia. But, as Tsai says in her superb essay in the catalogue, it “also derives from a Greek word which means white, light, and bright. It is the sense of the second that the painting evokes with its luminous colors, playful forms, and open rendering of space, shuttling between micro- and macro-scopic perspectives, and orbits both atomic and cosmic.” 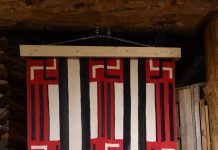 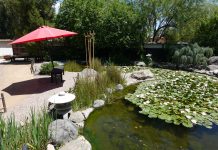 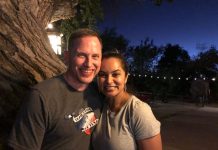 The State of Classical Music

Forms in a Cloud