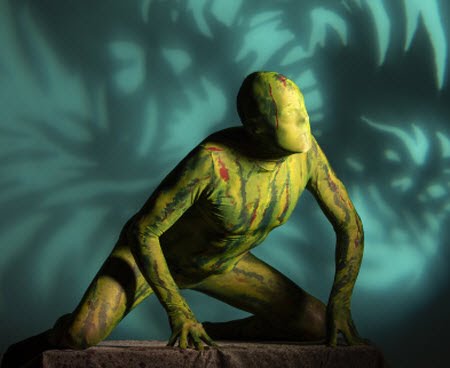 Herman’s favourite animal is a rabbit “because they were born prepared to listen.” Is this just a throw-away line, a bon mot of no substance, or is it rather an overly subtle message to the viewers of this world premiere play by Grant Bashore? To understand this play one must be prepared to listen, and read between the lines.

But even that is not enough as this play is largely shaped by mime, thus forcing us to use senses other than hearing. In its essence it forcibly reminds one of the Academy Award-winning movie The Shape of Water, featuring as it does an intelligent amphibian.

Mention is made in the play of an “atavistic apple” that one should hew on and “savour its juices to the core.” Presumably this is a nod to the iconic Apple of the Garden of Eden, but the term atavistic alerts us to not just a primordial human existence but an antedeluvian animal ancestry. This was ably explored in a 1994 Star Trek Next Generation episode entitled Genesis. In that episode, Deanna Troi becomes an amphibian.

One should consider the transformative interplay between human, amphibian, and interstellar visitor in this production a deeply psychological manifestation of the ‘cycles of creation’ that Bashore quotes from the physicist Marcelo Gleiser in the programme notes. Metaphysics is sprinkled throughout the dialogue: “Empathy is stronger than gravity and travels faster than a photon,” but it is metempsychosis that one must focus the mind on to understand Herman.

Few plays have the audacity to deliver a line such as “hypergenetic awareness of presumption” with an expectation of audience understanding. Short of approaching the performance with a meta-mindset, it may very well appear as merely a confusing melange of disconnected segments and technospeak.

The characterisation of the various characters (Herman, his mother, his father and his brother) was blurred at times; one needs a road map to assist the audience in figuring out the convoluted storyline. The use of three children in a too-long segment at the beginning was unnecessary, helping to push this production to a full 2 hours without intermission.

However as a showcase of Bashore’s talent, Herman is the ideal vehicle. The actor is superb, and very well versed in his trade, including dance disciplines that are mesmerizing. His training in Psychophysical Actions at the Bennett TheatreLab and Conservatory in Tucson is on full display here, especially in the jungle scene that was both artistic and stunning – a rare opportunity to see a true master at work.

The execution of this abstract and metaphorical work is flawless and should not be missed by true aficionados of experimental theatre.

Herman the Naturalist will be performed through Oct. 11, 2019 at the Scoundrel & Scamp Theatre, 738 N 5th Ave., Tucson. Visit their website: scoundrelandscamp.org