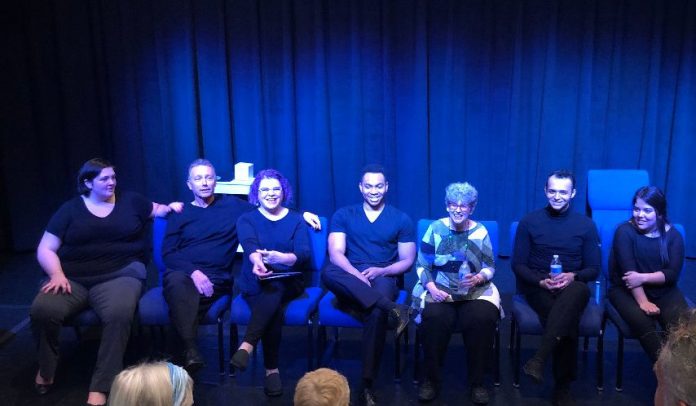 With the passing of yesterday (Jan. 7, 2020), Christmas is truly over. For those who missed it, Orthodox Christians celebrate Christmas according to the Julian calendar established by Julius Caesar. Thus, Christmas is not on Dec. 25, but Jan. 7.

This is therefore a fine time to take a brief look back not at your Christmas break, but rather the play Christmas Break by Tucson’s most excellent playwright Monica Bauer. (Perhaps my timing reason here is a bit “unOrthodox” but literary license is boundless; please forgive the pun). Christmas Break was performed as a reading (not a fully staged play) by the Winding Road Theatre Ensemble on Nov. 9 and 10, 2019.

“The play is not quite a year old,” Bauer told the audience at the Scoundrel and Scamp Studio Theatre in Tucson. “I got the idea after visiting my brother and sister-in-law, who have a dog.” One unseen character in the play is a dog, “and that got me thinking about what dogs can get into on a family holiday.” Suffice it to say the dog did not do well in this play. Christmas treats and pets don’t always mix.

This is a play peppered with bon mots such as one delivered when a character exclaims “Oh my God!” The response: “Don’t agnostics need another way to express surprise?” Or how about this one:”You’re a lawyer, just lie to her!”

My favourite phrase in the play is “excessively annoying moral consistency.” It’s the sort of thing one can use when being catty about someone during a cocktail party.

In a play in which everyone manifests some degree of dysfunction, one could simply place an “out of order” sign on the family portrayed here to be concise about it. Nonetheless there are moments of family cohesiveness, as one would hope for during Christmas break. “The group hug is my favourite moment in the play,” admitted on theatre goer.

Filled with environmental activism run amok and angst about the family dog, anyone in real life would need a break after experiencing a Christmas break like this! So many conflicts are introduced that not all those potential flash points are picked up as the play goes along, but the cast did an excellent job in the “reading format” with no stage set and only minimal props to sustain their acting. Overall a very fine show that will hopefully be given a full production in the future.

Speaking of the future, another Monica Bauer play is being performed in Tucson next week at The Invisible Theatre. Entitled Vivian’s Music, 1969, it has 2 shows only: Jan. 18 and 19. Visit the website for tickets: www.invisibletheatre.com

Winding Road has two productions for early 2020, so check these out:

The Women of Lockerbie is based on the plane that crashed in Scotland (thanks to Libyan terrorism). It runs March 20 and 21 at St. Francis in the Foothills. From April 16-26, a series of eight scripts will be performed, each 10 minutes long. This will take place in the Scoundrel and Scamp Theatre in downtown Tucson. Visit the website for tickets: windingroadtheatre.org

Photo with this article by C. Cunningham. Monica Bauer is third from right in this cast photo 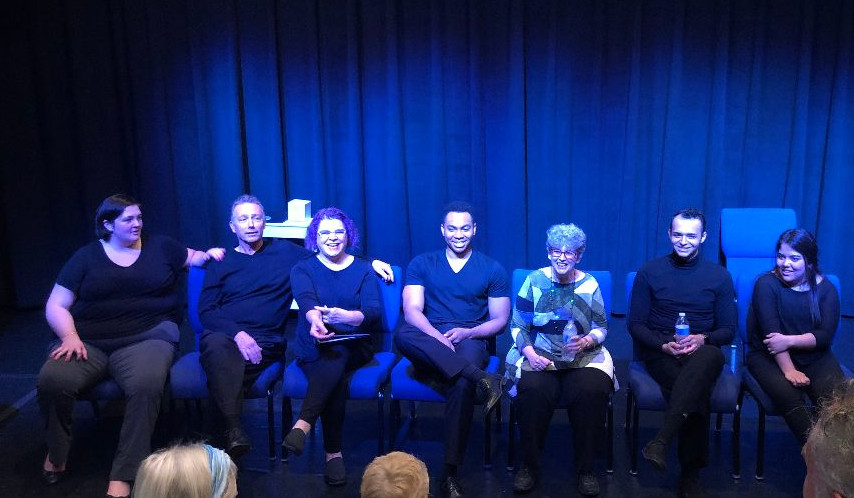