In his review of the 1821 book Metrical Legends by the poetess Joanna Baillie, the Scottish writer Thomas Carlyle delivers a sorry verdict. “On a first perusal, her Metrical Legends of exalted characters disappoint us extremely. They give us no idea at all of the heroes whose characters it is their purpose to celebrate; and we throw down the book in a state of irritated ennui, declaring it to be tedious and prosaic beyond endurance.” In the very next sentence, Carlyle delivers his final verdict, stating her “performance has failed,” even though he found “much beautiful and spirited poetry” in the work. Alas, it was “sprinkled over a barren groundwork.”

While not all book reviews by Carlyle (1795-1881) are as devastating as this, it was his style to cast shade on people he was writing about. But paradoxically he thus cast light on those very people in a manner no other writer had ever done before, or since. It is this light of critical reflection on the lives of several great people that is a precious legacy to us, and the great strength of this book which collects all his essays. When published, these essays masqueraded as book reviews, but not like a book review you have ever read.

Most of these are of extraordinary length. The one on Voltaire, for example, covers 54 pages in this book. His fellow Frenchman Diderot gets 53 pages. On British soil, Dr. Johnson also gets 53 pages, and Robbie Burns 45 pages. In this massive book of 827 pages, the essays fill 339 pages; this is followed by 276 pages of Notes. The so-called “textual apparatus” covers another 176 pages. While this section which lists variants in the spelling and format of words from one early edition of Carlyle’s Essays to the next will be of purely scholarly interest, the Notes contain a wealth of background information on the meaning & origin of Carlyle’s words and phrases.

Consider for example Carlyle’s verdict on the value of a Good Man (I give here a condensed excerpt of what he wrote): “He is ever a mystic creative centre of Goodness; his influence is not to be measured; for his works do not die, but being of Eternity, are eternal. Thou who exclaimest over the horrors and baseness of the Time, and how Diogenes would now need two lanterns in daylight, think of this.”

For those not familiar with the life of Diogenes (what does two lanterns mean?), the notes for this passage are helpful. The Greek philosopher Diogenes lived from 412 to 323 BCE. Quoting from the notes, “Condemning the perceived laxity of his fellow citizens, he is said to have wandered the streets carrying a lantern and looking for an honest man.” If Diogenes lived in Washington DC now he would need a lot more than two, but the point is well made by Carlyle. And I illustrate it for this review with my own extraordinary 19th century bronze statue of Diogenes, where you can see his lantern resting on the floor behind his Egyptian-style chair.

The book has been meticulously edited over a period of years by Fleming McClelland, Brent Kinser and Chris Vanden Bossche, professors at three American universities. Thus I was astonished to find one typo in the text, in the essay on Burns. It appears on pg. 62. The text should read: “were it not that in the interim he must die of hunger” not “…the interim the he must…” 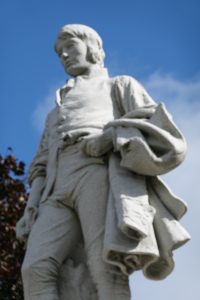 Carlyle was fulsome in his praise for Burns. Noting that he died at age 37, Carlyle laments “Alas, his Sun shone as through a tropical tornado; and the pale Shadow of Death eclipsed it at noon! Shrouded in such baleful vapours, the genius of Burns was never seen in clear azure splendour, enlightening the world. But some beams from it did, by fits, pierce through; and it tinted those clouds with rainbow and orient colours into a glory and stern grandeur, which men silently gazed on, with wonder and tears!” No one ever grasped the essence of Burns better than Carlyle in those lines. “No British man has so deeply affected the thoughts and feelings of so many men. We rank him as the first of all our Song-writers.” Photo to right is a statue of Burns in Barre, Vermont.

Carlyle alludes to Burns having a particularly precious gift: in his heart resides “some tone of the ‘Eternal Melodies.” The Notes devotes a long paragraph to this, saying it may be linked to both a passage of Goethe that Carlyle had translated as “Melodies Eternal,” and also its relationship to the music of the spheres: the Pythagorean doctrine that the rotation of the planets created such music.

Diderot does not fare so well with Carlyle. “His literary productions were invariably dashed off in hottest haste, and left generally, on the waste of Accident, with an ostrich-like indifference.”

Even within an essay of a particular person there abound gems of wisdom that are widely applicable. For example in an essay dealing Sir Walter Scott is this: “There is no life of a man, faithfully recorded, but is a heroic poem of its sort, rhymed or unrhymed.” Scott himself does not do well at the pointed pen of Carlyle. The highest quality to be discerned in Scott is “a love of picturesque, of beautiful, vigorous and graceful things; a genuine love, but not yet more genuine than has dwelt in hundreds of men named minor poets.”

One could on for thousands of words about the various essays of this book, which is not just a scholarly treasure but a delight to read as it encapsulates some of the most penetrating insight of any Victorian writer. This would make a very fine gift for anyone with a love of literature, but more particularly it is another major addition to Carlyle scholarship as this is the 5th volume in a series that began 27 years ago. The titles in the Norman and Charlotte Strouse Edition of the Writings of Thomas Carlyle are:

On Heroes, Hero-worship, and the Heroic in History (1993)

Thomas Carlyle: Essays on Literature is $150 from Univ. of California Press.

Both photos with this review are by Dr. C Cunningham

Trump’s Niece: He Exists in a Dark Space

Quixotic book about The Moon