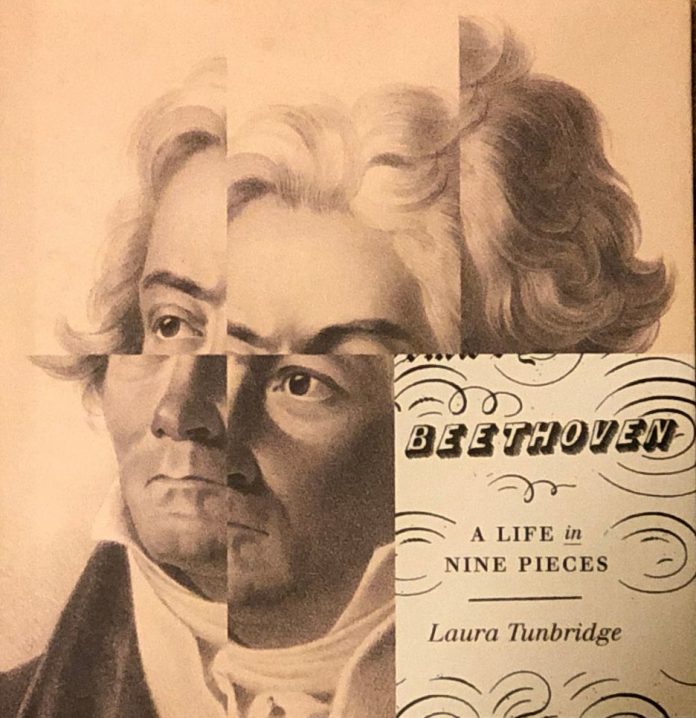 Because genius is a divine attribute and not a human one, it is often the case that great geniuses have their humanity erased in the cultural worship which follow their persons – especially after their deaths.  They are thought to be more than us – more than the rest of humanity.  They are perhaps the people we worship when we tire of worshipping God.  But in the erasure of their humanity, even some of their divinity is done away with; to pretend them to be anything more than human is to limit the existential struggles they suffered for the sake of their greatness and genius.  Ludwig van Beethoven is a genius and a historical victim of his genius, and Laura Tunbridge’s new biography is meant to re-install an understanding of Beethoven, not as god, but as human.  Human, dirty human, raw human, magnificent human, human human.  I like to say that Beethoven is the first composer whose compositional catalogue, if it were entirely assembled, would offer the portraiture of a completely assembled human soul.

Perhaps in that vein, Professor Tunbridge examines Beethoven’s life thru nine of his musical creations; “My starting point. . . .is Beethoven’s first success, the Septet, op. 20.” She writes that “Each chapter focuses on a period of his life, a piece of music, and a revealing theme, from family to friends, from heroism to liberty.”  In defiance of conventional Beethovian studies, Tunbridge does not select her nine study-pieces for their now-established musical reputation; she selects her study-pieces for the opportunity of reflection they provide in examining the life, the relationships, the artistry of Beethoven – each one equally as complex as his murderously complex music.  “Beethoven is usually thought of as a loner [an outgrowth of his musical godhead].  Friendship and collaboration. . . .however. . . .was of fundamental importance to him creatively and personally”.  The Kreutzer sonata, one of Beethoven’s musical revolutions, was literally composed around the prowess and personality of George Bridgetower, virtuosic violinist and composer (at least the second and third movements of the concerto-like sonata were), showing “the influence a performer could have over his [Beethoven’s] musical imagination.”  Beethoven would connect Bridgewater to many eminent people in Vienna, but he was not the primary instrumental collaborator for Beethoven on the violin: that was Ignaz Schuppanzigh.  “Schuppanzigh was both a prominent performer and an innovative programmer; he was instrumental [literally] in giving the first public quartet concerts in Vienna and established new standards of performance.”  He was the musician for whom Beethoven composed “eight” violin sonatas and also who premiered the majority of Beethoven’s quartets.  He premiered Beethoven’s septet, which was the first composition to give success to the composer.  Like the greater portion of fallen humanity though, his romantic relationships were stickier and more interesting than his mere friendships.

Beethoven’s proposed love life has been gravitating around the “Immortal Beloved” letter for over a century-a letter addressed to his “my life-my all”.  Beethoven wanted love, yes, but he also wanted a wife.  Did he wish to marry the Immortal Beloved?  Possibly.  But who was the Immortal Beloved?  “Regina Lang. . . .Antonie Brentano. . . .Giulietta Guicciardi. . . .Therese Brunsvik. . . .Bettina von Arnim”?  Yet even if Beethoven had loved any of these women, he would not have been considered a suitable marriage partner.  He was of a lower class than most of his female acquaintances, who were aristocrats.  Beethoven wrote to his friend Ferdinand Ries, “Unfortunately I have no wife.  I found only one, whom no doubt I shall never possess.”  Class was a pre-eminent construct of Beethoven’s time and society, which he raged against but could not overturn, at least not in his love relationships.  Musically, Beethoven is often said to have been the first composer to hold himself foremostly accountable to his own artistic desires and not those of his patrons.  He is famous for such quotes as this one (to Prince Lichnowsky), “There are many princes and noblemen.  There is only one Beethoven.”  And of course, there is Beethoven’s unprecedented revolutionary transformation of music as it was known.  He did it with almost every form and instrument.  His Kreutzer sonata was the first of its kind to treat the piano and violin as “equals” in the instrumental sonata.  Kreutzer was concerto and sonata fused.  His Eroica Symphony was as disruptive to musical convention as the man it was once dedicated to was to Europe: Napoleon Bonaparte.  (Incidentally, Beethoven almost left Vienna at one point because of the economic destruction wrought by the Napoleonic wars.  His patrons kept him in Vienna by promising to pay a yearly salary to Beethoven for the rest of his life.  Only one of them kept his promise.)  He was the first composer to write a symphony with a choral movement.  He was, in my opinion, the greatest composer of all time.

Because great men are often microcosms of their world, those who shape their epochs, to study a great man’s life is not merely to study the history of one individual; it is to study the narrative of an entire epoch of history.  This biography is not meant to study an entire epoch, but because Beethoven was so influential, it does so anyways.  It is a book of great value, because it enlivens Beethoven thru small details, human details.  Letters begging forgiveness, tantrums thrown against patrons, walks in the countryside, and the many and great strains and artistic deaths he had to suffer to create the greatest music of all time.  At the end of reading this biography, Beethoven is less god than man – but if heaven has a composer-in-residence, I still wager that it is Ludwig Van Beethoven.

Beethoven: A Life in Nine Pieces is $35 from Yale University Press. Laura Tunbridge is Professor of Music at the University of Oxford. 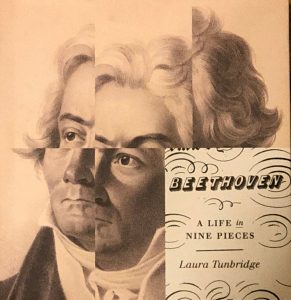 President Truman and the Cold War