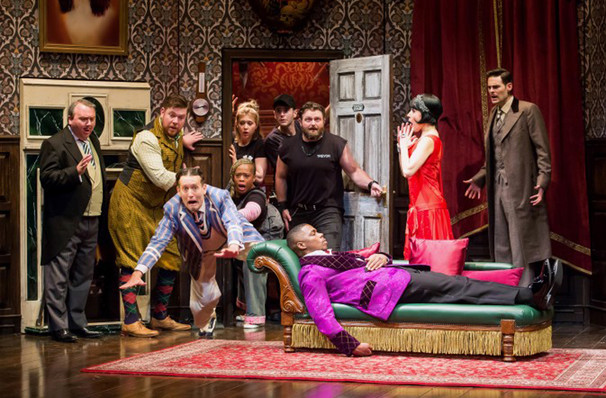 Combine Agatha Christie with Fawlty Towers and Blackadder and what do you get? This most English of comedies: The Play That Goes Wrong.

It began at London’s veritable Apollo Theatre in 2015 winning Best New Comedy in the Olivier Awards. It then hopped over the pond to Broadway for 745 performances from 2017 to 2019. Star Trek fans know all this as the current guru as Star Trek TV and movies, J. J. Abrams, made his theatrical producer debut with this show.

If you have never seen a thoroughly English play, this one will come as a true culture shock. While it can be likened to Harold Lloyd films, or even skits on the Carol Burnett TV show where mayhem ruled the roost, The Play That Goes Wrong takes all this and puts it on steroids for the stage. The premise is torn right from the pages of an Agatha Christie novel: several curious characters are at an English country house, and there is a murder. Who did it? Maybe the butler?

Director Chris Lanceley certainly has the best job here as he also stars in the play as the Inspector. This no Inspector Clouseau, as he plays it with intensely seriousness. He can even be seen in the lobby of Centennial Hall between acts, trying to find people or clues. As the second act commences he apologises to the audiences for the gaffes in the first act, and this descends into a battle royal between Tucson and Phoenix as he is greeted with laughter. “The audience would not behave this way in Phoenix, that’s a real city!” This shot at the civic pride of Tucson is met with loud howls, which became a chorus of boos when he promotes Arizona State University over our local UA. 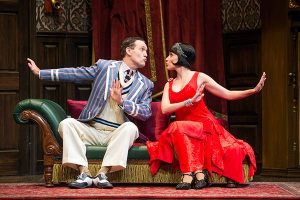 A full scale riot was only averted by the precipitous beginning of Act 2, which saw various stage hands still prepping the set as the curtain went up! One can either think of this play as a simulacrum of today’s disintegrating society, or just go along for a wild ride and leave your reason at the door. There is literally no way to make any sense of what transpires on stage, which is the alchemical magic of the play.

For some in the audience it was too vaudevillian, but other appreciated the performance for its surprise nature. “I wasn’t expecting it to be as broad and physical,” one person told me. Another admitted she had a dry sense of humour, but “I’m laughing anyway. Maybe if all those things went wrong on stage that would be me. But maybe if I over-thought it I’d wonder what I was laughing at.” Like I said, leave your reason at the door and get caught up in the madcap thrill of it all.

The set is for many the star of the show. It is very dynamic, with tilting floors and precise choreography. Yes, the set is a choreographic event in its own right, as pieces fly or fall on cue, especially in the last scene. With a great cast and a superb set, this is one to see.

The Play That Goes Wrong is being performed through January 19, 2019.

Seeking a Great Idea in Theatre