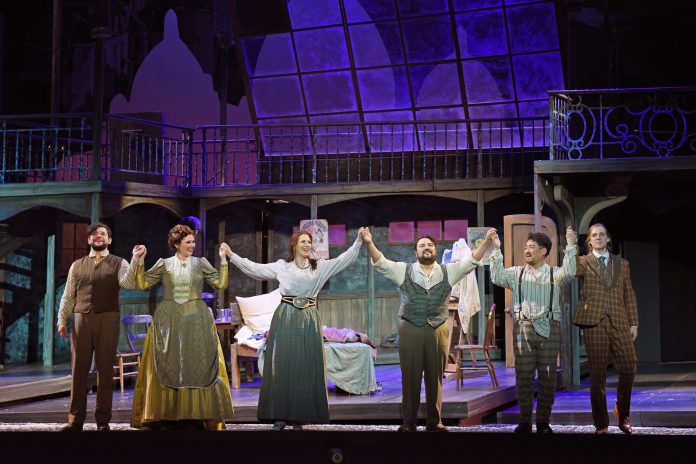 La bohème operates on a dual level. The first two acts are full of joie de vivre and exhibit a carefree attitude to love and life that reflects the sunny side of Parisian life in the mid-19th century. The final two acts becoming increasingly mawkish as the opera moves to various stages of displaced love and finally death. Assembling a cast that can handle both the comedic and dramatic roles with equal aplomb is always a challenge, but Arizona Opera with Stage Direction here by David Paul has met that challenge.

Yongzhao Yu, who has appeared in Bellini’s Norma at a production in Beijing, follows in the footsteps of Kang Wang as a Chinese tenor who convincingly assumes the role of the love-struck Italian Rodolfo. (Wang appeared as Rodolfo in a 2019 production of Austin Opera). Yu received the loudest ovation of the evening for his vocal and acting talents. Yu never loses character, he is always present in the moment, and all his movements on stage were fully justified.

There was a real chemistry between him and Julie Adams as the delicate Mimi, who ekes out a modest living doing embroidery. Their Act 3 duet on the unbearable thought of being alone in winter was entrancing, and as this transformed into a competing duet by Marcello (Octavio Moreno) & Musetta (Cadie Jordan), the effect was spine-tingling. Leonard Bernstein regarded this as one of the best moments of opera, and these four singers certainly delivered it.

The circus scene offered by Puccini in this 1896 opera affords an opportunity to show how words and music can manipulate a certain feeling, how an emotion might be brought to life. La bohème is the poetry of love, expressed by the psychological dynamic of Rodolfo: his impulse to protect Mimi is the reason he leaves her.

The stage, whose floor tilts daringly in this production, quite literally offers a new angle on this classic opera. And the scenic design by Peter Dean Beck also offers an upper and lower level perspective for the Act 3 competing duets; the use of silhouettes on the balcony in parts of Act 3 offers yet another angle to represent Rodolfo’s thoughts.

Overall a very fine and emotionally charged presentation of one of the most performed operas of all time.

Visit the website for tickets to future operas: AZOpera.org

The modern opera Riders of the Purple Sage appears in Tucson on March 7 and 8. 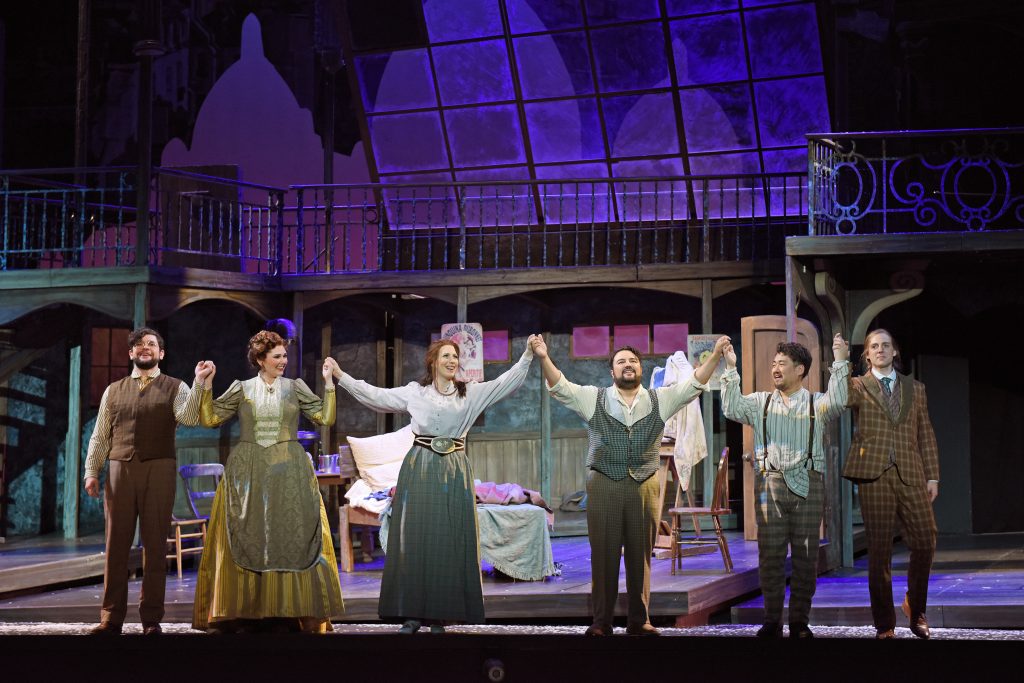