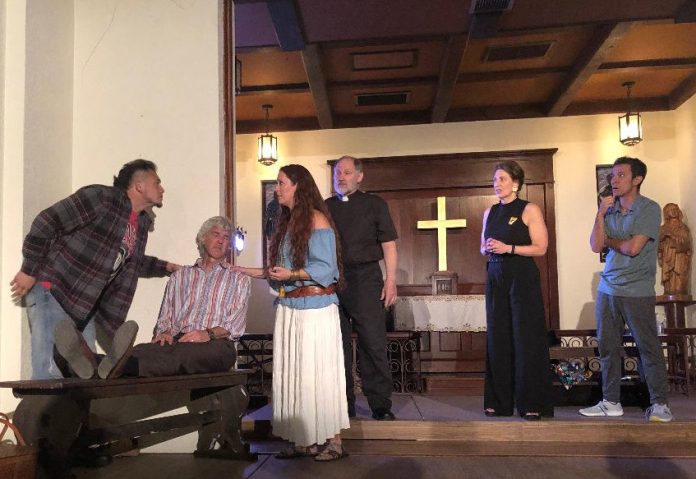 What better place to see fallen angels than a chapel? The Saint Francis Chapel in Tucson is now hosting its first play, Angels Fall, which actually takes place in a chapel. Thus, this is that rarity in theatre, a site-specific production.

This play by Pulitzer Prize winner Lanford Wilson (1937-2011) premiered in 1982, and had a short 57-night run on Broadway in ’83. The opinion of the New York Times review at the premiere is just as relevant then as now.

“The play’s ailments, a few cheap jokes aside, are built in. Mr. Wilson can’t escape the contrived nature of his plot gimmick; it seems like double overkill that his lost souls find themselves in both a real-life apocalypse and a church as they grapple with their crises of faith. And along with the locked-room format come the creaky conventions of the well-made play. The path from exposition to catharsis to resolution is too predictable; it’s implausible as well as sentimental that all six characters would neatly arrive at individual ephiphanies by the final curtain.”

Despite the pitfalls identified in that review, and a fair amount of superfluous dialogue whose excision would shorten it nicely, Angels Fall does hold one’s attention. The 6-person cast does a very fine job at extracting every psychological nuance from the script.

At the centre of this is a phrase that recurs throughout the play. At one point it is expressed by the priest (played by David A. Johnston) to an Ivy League professor on his way to Phoenix for what one might charitably term spiritual therapy. “You are experiencing a disturbance in your willful suspension of disbelief,” he says to the prof, played by Glen Coffman.

Targeting a suspension of disbelief in a chapel whose prime function is to suspend disbelief is certainly one of the boldest moves a playwright could make. Unfortunately Wilson, instead of delivering the message subtly, rams it down our throats when he has the priest say later in the play that the phrase “is right in my wheelhouse.” When the professor’s wife, played by Shanna Brock, starts talking about “the secret of the Universe,” no one in the audience should be under any misapprehension about the message of the play.

The corker comes from the lips of the priest, when he states with insouciant wonderment, “I am amazed at how human everyone is!” It’s as if he expected his chapel in the middle of nowhere to be populated not by random travellers but by aliens. It reminded me of the remote bar in the 1961 Twilight Zone episode, Will the Real Martian Please Stand Up, where the patrons turn out to be from various planets.

People are in flux in this play: one has to infer a lot about the motivation of the characters, including a hypochondriac tennis player (Cole Potwardowski), the boy-toy of wealthy widow ( Susan Cookie Baker). Even though their role is peripheral to the main thrust of the play, they are more ‘normal’ than anyone else here and the actors deliver this necessary grounding well. The wild card in the 6-person cast is an American Indian doctor, played by Luke Salcido with enough brooding to make Marlon Brando look like a cheerful guy. A powerful and convincing performance, in a play that Winding Road Theater Ensemble has done a superb job in presenting to Tucson.

It is being performed now by the Winding Road Theater Ensemble until Mar 1, 2020.

Tickets for Angels Fall can be obtained on the website windingroadtheater.org 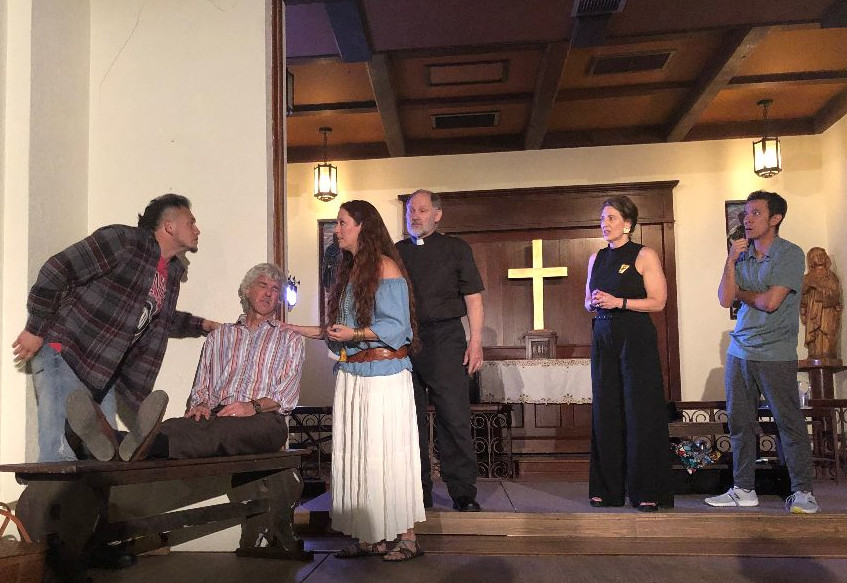