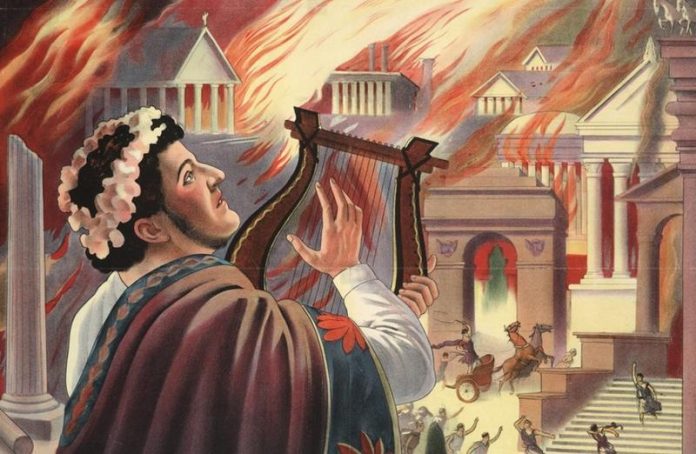 A fiery volcano that erupted in Alaska in 43 BCE had a significant event on Rome just a year after Julius Caesar was assassinated.

In research published late June 2020 in the Proceedings of the National Academy of Sciences, paleontologists worked with classical historians to write a new chapter in our account of the most pivotal period in ancient Rome. Causing very wet summer and autumn periods in 43 and 42 BCE, the research lends “credibility to reports of cold, famine and disease by ancient sources,” according to Dr Andrew Wilson of the University of Oxford. The Okmok volcano created a shock that “must be seen as having played a role in the historical developments for which the period is famed.”

It is unfortunate this major discovery came too late for this book about the role of fire in the shaping of ancient Roman political and social life. Author Virginia Closs of the University of Massachusetts would have had even more grist for the mill in her wide-ranging exploration of fire in Roman times – sometimes as a destroyer, other times in its role of a phoenix, where something beautiful arises from the ashes.

Even though Nero is the subject of a large part of the book, nearly as prominent is the first emperor, Augustus, the nephew of Julius Caesar. Closs tells of Timagenes, who arrived in Rome as a war captive in 55 BCE. He gained patronage as a writer under the reign of Augustus, but his penchant for bitter quips got him thrown out of royal favour. He retaliated by burning his own works. Closs suggests this may have been at attempt at conciliation (not a very bright notion, in my opinion), but the net result was his work “was destroyed as an indirect result of his contrarian stance.” The episode, she writes, “also suggests that fire represented more than just an instrument of urban warfare or political violence; equally, it could be viewed as a tool for suppressing subversive speech or erasing inconvenient history.” Augustus himself famously burned paperwork that erased a huge debt owed to the Roman treasury, thus earning him an equally huge debt of gratitude by the Roman people.

A century after the Timagenes episode, the emperor was Nero, “who oversaw a revival of Afrianus’ Incendium, a farce in which characters escape from an urban conflagration. According to Suetonius, the play became a perverse kind of game show as the set was actually torched and performers were allowed to keep the items they seized.” That was likely in the year 59, five years before the Great Fire that burned most of Rome. Was Nero responsible? Did he fiddle while Rome burned, singing of the fabled fall of Troy while the flames rose ever higher? It was all likely bad press written after the event, but for the purposes of this book it doesn’t matter. Closs is concerned with the imagery and its effects, as portrayed in literature and plays. She relates the scene of Achilles outside the walls of Troy from the tale of Homer, where the war hero takes up his lyre and sings the ‘glories of men.’ “Nero’s simultaneous roles as witness to and performer of a legendary destruction narrative suggests formal parallels “ with that Homeric scene. And of course one cannot help but consider the situation in 2020, where we see another autocratic leader fiddling while the country literally and figuratively burns.

Closs takes a long, close look at the play Octavia, probably first performed 5 to 10 years after Nero’s death in 69. “Octavia both commemorates Nero’s own apparent penchant for self-mythologizing and constructs the emperor and his inner circle as proleptic avatars of fiery destruction. In doing so, the Octavia constructs Nero as an overdetermined agent of destruction, a character driven by larger cosmic and historical forces to bring Rome to the brink of oblivion.” The author examines a work by Tacitus, the Annals, written in 109, some 45 years after the fire. There he too equates the Great Fire as comparable to the Fall of Troy. “Tacitus’s method of allusion in the fire narrative demonstrates how readily events at Rome, often figured as the centre of the cosmos and the apex of human achievement, invited parallels from myth and legend.”

By devoting a whole book to the agent of fire in ancient Rome, Closs puts the famous Great Fire and Nero into a new perspective, one that has never before properly been done in straightforward biographies of Nero. As such this is a most insightful and valuable book, complete with notes that fill 70 pages!

While Rome Burned: Fire, Leadership, and Urban Disaster in the Roman Cultural Imagination, is $80 from University of Michigan Press. 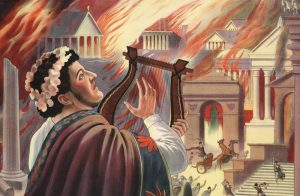