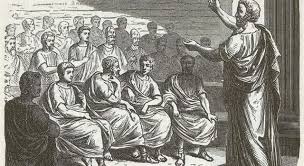 A collaboration of 16 authors, this is the third in a trilogy of book on Roman Declamation. The first two, dealing with Quintilian (2016) and Calpurnius Flaccus (2017) were published by DeGruyter Press.  All three have been edited by Martin Dinter (King’s College, London) and Charles Guérin (Sorbonne University). They were joined by Marcos Martinho (University of Sao Paulo) for the first and third books as an editor.

With 15 chapters and a 15-page introduction by Dinter and Guérin, I can only touch on some highlights here, but I will state at the outset this is an outstanding book and a most valuable contribution to the field of declamation, which has never before this trilogy received the scholarly attention it deserves.

So what exactly is declamation? An idea may be gained from an explanation given by the Roman Cassius Severus, “noted for his inability to equal his achievements in the forum when declaiming despite apparently having all the necessary talents,” writes Yelena Baraz (Princeton). Seneca the Elder takes an agnostic stance on this, preferring to let Cassius himself explain it: “When I speak in the forum, I am doing something; when I declaim, I seem to myself to be toiling in a dream.” To declaim, one had to be an actor of sorts, getting into character and conversing with oneself. Sort of like a soliloquy, in a play, where the audience must be persuaded of its genuine nature, but here “the declaimer moves through multiple parts in a circular manner, splitting into several characters that respond to each other, and is to be judged by the audience.”

It is Seneca that is the centrepiece of this exploration of declamation, with two of his texts in particular under scrutiny: the Controversiae and Suasoriae.  In the former he famously claimed that “it is memory, of all parts of the mind the most vulnerable and fragile, that old age first assaults.” But as Dinter states, “he conferred agelessness upon his own memories- and, by extension, upon Roman declamation.”

Seneca wrote of those who were practitioners of both Latin and Greek declamation: it appears that most frowned upon those who did both. In Guérin’s analysis of this matter, he writes “Greek declaimers seem to engage in internal battles,” and they often selected improper topics. That upset Roman sensibilities. One of them, Timagenes, was actually banned by the Roman Emperor Augustus as he tended towards indecent subjects; in an odd sort of revenge, Timagenes burned his own Imperial histories! “In Seneca’s account, the Greek declaimers shared a rhetorical and declamatory culture that was not only detached from Latin language, but also from Roman culture.”

Guérin accuses Seneca of a double standard. On one hand, he regrets the intrusion of Greeks declaiming on Latin topics, “but never regards Latin declaimers developing Greek themes as a scandal or a threat.” While he extensively quotes and describes the works of Latin declaimers, when it comes to the Greeks he “contents himself with making broad judgments, while Greek quotes are left largely without comment.” This naturally poses a problem to the historian, who is otherwise largely left in the dark about Greek declamation.

The anthology of declamatory speeches by Seneca the Elder represents our largest surviving collection of such speeches, which really originated at the time of Seneca the Elder (54BCE-39 CE), the father of the more famous person of the same name. In his chapter, Orazio Cappelo provides the best description of Seneca’s Controversiae: “a work that institutionalizes a practice [declamation], that systematizes it, and sets out the coordinates for the rhetoric of the future: a dynamic work about power, over and above an inert compendium.”

The overly exuberant language and unduly enthusiastic metaphor employed in declamation has hindered a proper scholarly study of this important artform, which is one reason this book is so important. As Anthony Corbeill (Univ. of Virginia) notes, “by embracing excess as a deliberate literary ploy and as a generic marker, Seneca offers access to this new genre in its infancy, witnessing the growing pains as boundaries are created and tested.” Christopher van den Berg (Amherst College) states Seneca the Elder had a “larger strategy” in mind in his books on declamation. It was nothing less than aligning “the history of the art with his own life’s history, as he carefully interweaves his own biography and biology into the literary history he presents.” This gives us a unique insight into the life of an ancient Roman, and for that reason alone the insights offered by this book make it an essential addition to any library.

(The book has an Index Rerum and Index Locorum, but it lacks an index of names. So, if the reader wants to find pages where Timagenes makes an appearance, for example, there is no recourse but Google Books.)

Roman Declamation: Seneca the Elder is $115 by Oxford University Press. 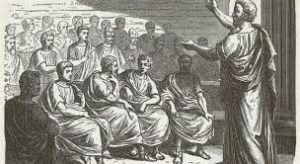 Quixotic book about The Moon

Crystals: The Breath of the White Dragon