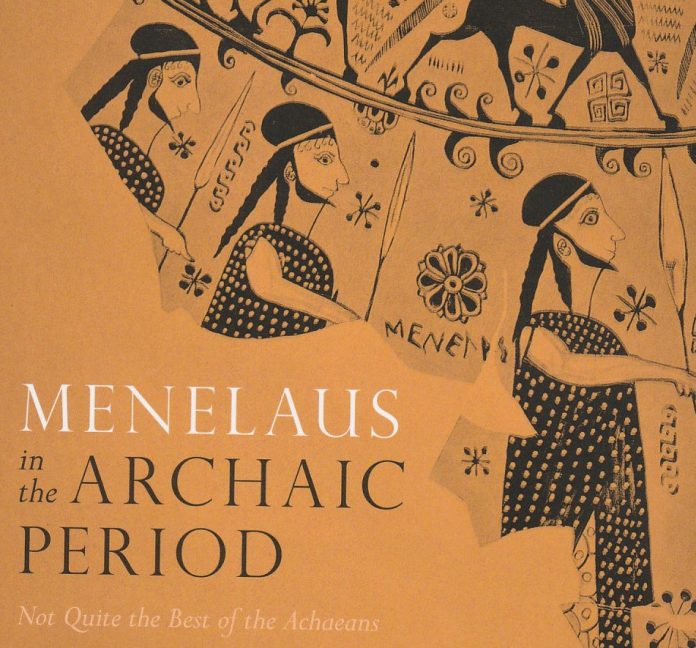 Achilles, Hector, Agamemnon, Odysseus, Menelaus. The first four heroes are recognizable to everyone, but who is Menelaus? Author Anna Stelow has written the first book ever devoted to Menelaus, a key figure in the Iliad and The Odyssey. To say that Menelaus was the husband of Helen of Troy is like saying Joseph was the husband of Mary. We all know Helen and Mary, but what of their husbands?

Stelow makes the point early in her book that the poet of the Iliad “invites the audience to regard Menelaus as a ‘personality’ ” much as Achilles is more than just a name, but a real person we can relate to. To gauge the importance of Menelaus, one must think of where all the Achaean heroes of the Iliad and Odyssey ended up: dead. Only Menelaus was granted immortality by the gods, where he even now is enjoying the Elysian Fields.

For the reader of the Iliad, Achilles has the starring role “and its main theme is his wrath, but the sub-theme of the poem is the Trojan War and it, by and large, belongs to Menelaus.” Why then has Menelaus fallen through the cracks, as it were? This is the central issue that animates Stelow’s book.

The prime reason and chief protagonist of the Trojan War is Menelaus for the simple reason it was his wife, Helen, who was abducted by Paris of Troy. Menelaus was the brother of Agamemnon, and the son-in-law of Zeus, king of the gods. Not a bad family tree! He makes an appearance in 17 out of 24 books in the Iliad. “At the climax of his story,” writes the author, “Menelaus delivers one of only three true monologues in the poem. The monologue invites the audience into his head, as it were, to hear what no other character does and-if we choose-to adopt his point of view.” Clearly, there is rich ground here for Stelow, and she makes the most of it in this masterful study.

Throughout the ancient poem, Homer “uses similes to mark the most important episodes and Menelaus’ role within them.” Stelow examines each in detail. One of them (Book 13. 588-92) is both unique and memorable as it conjures his steadfastness in battle. Another compares him to ravenous lion.

A key element of the Menelaus story is that he cannot die, for if he did, the entire reason for waging the Trojan War (rescuing Helen, and restoring her to her husband) would cease to exist. Whenever he makes a bold proposal that might risk his life, “the other Achaean leaders rise up en masse to restrain him.” Even though he was (apparently) vulnerable, even the great Hector declined to risk an encounter with him. His key moment comes in Book 13.620-639 when he “utters the fullest and most direct justification to be found in the Iliad for the Trojan War. No other Achaean in the poem, apart from Achilles, is granted the opportunity to express so fully his opinions.”

Readers of ancient texts are all too familiar with hubris, the invincible belief by a certain personage that he is right, so much so he might even utter words that criticize the gods themselves. Menelaus feels that invincibility, and he does utter those words against Zeus himself (he calls Zeus father, due to the fact he married the daughter of Zeus). In any other story, and for any other hero in the Iliad or Odyssey, hubris is fatal. But not for Menelaus. His “seemingly extravagant claims upon the gods’ protection are consistently ratified by them.” When he complains to Athena, she smiles, because, as Homer writes “he prayed to her first among the gods.” Thus she grants his request that all men – even Hector –  tremble before him!

Stelow also pays attention to very early poems other than those attributed to Homer. One of these is the Nostoi, which tells of the homeward journey of the Achaeans after the fall of Troy. From what little we know if it, it hews closely to the works of Homer. This nostoi tradition is regarded as a likely source used by Homer. Stelow wisely eschews the claim of some recent scholars who say Menelaus was the hero of the Nostoi. Evidence for it, she states “is lacking; and any speculative claim of this sort exceeds the purview of my study.” A more famous source, the poetess Sappho, “implies that Helen’s passion [for Paris] must have been very great indeed to leave so excellent a husband.”

The depiction of Helen and Menelaus was a favourite subject depicted on Athenian vases for nearly the entire sixth century BCE, a matter she delves into with ten case studies. The earliest depiction of Menelaus, shown with this review from the front cover of the book, dates from the mid-seventh century BCE. He is shown as part of a procession, perhaps from a festival; or the mustering of leaders before departing for Troy. Whatever it depicts, “marking him out from the crowd invites the modern reader to seek for a story.” Even though the iconography on this and the other pottery has been well noted in the past, “scant attention has been given to what the pictures ‘say’ about Menelaus.” The author does a fine job at teasing every nuance of meaning from the visuals under study.

Finally, I will describe why Menelaus has been branded with the title as “not quite the best of the Achaeans.” Despite all the great things said about him, there was always a quibble about Menelaus. He never does fight a duel with Hector; when Hector “comes into view, Menelaus debates as to whether or not he should engage him and ultimately decides to flee.” Several vase painters showed Menelaus  dropping his sword. The god Apollo himself stated Menelaus “formerly was a soft spearman.” Stelow fights back at the mis-reading of this passage from the great Plato. “What Apollo does not say is precisely what Plato and so many subsequent readers have assumed, that Menelaus is as poor a warrior as his reputation would imply.”

Certainly his reputation in Sparta never wavered. Menelaus made his home there, and a temple was built to honour him and Helen. The author devotes a chapter to the archeological finds at this temple, the Menelaion. Dedications to the pair from the seventh and sixth centuries BCE “are among the earliest inscriptional evidence for the worship of any Homeric hero in Greece.”

By rescuing Menelaus from relative obscurity, Stelow has given the world a truly revelatory insight into the works of Homer, which is quite a task considering the plethora of books written about it. With a thorough 30-page bibliography and extensive footnotes, this is a landmark study which will surely be appreciated by the only Achaean hero in Homer’s poems who is still alive somewhere.

Anna R. Stelow is a researcher in ancient Greek literature at the University of Virginia. Her interests include Homer and archaic Greek poetry and heroic narrative in archaic Greek art.

Menelaus in the Archaic Period: Not Quite the Best of the Achaeans is $110 from Oxford University Press. 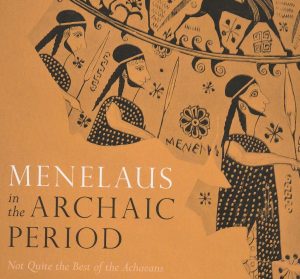 The Revenge of the Similacrum