The day is December 23, 1915. Dr. Watson, at a hotel in Paris, is writing letters to the press in London to announce the death of Sherlock Holmes. The game is afoot, but Watson is oblivious to that as the play opens.

Luke Howell reprises his 2016 role as Dr. Watson in this production of Sherlock Holmes and the East Wind. It was created for the Arizona Rose Theatre, and appears there again, but this time in their permanent location (inside Tucson Mall). Howell is also joined by the same actress who played his wife in the 2016 show, Kate Scally; another cast member, Ruben Rostenhausler, also reprises his role as the German-hating Jacques.

The return of Howell and Scally is not surprising as they wrote the play, and Luke is the director. To make it even more of a family affair, the music is by Brandon Howell with additional lyrics by Stephanie Howell. Watson’s nephew in the play is portrayed by William Howell, and the artistic director is Cynthia Howell.

The play is set during the “Great War,” now known as World War I, a fact which not only serves as the backdrop to the play but provides the animating spark that leads to a murder in the hotel where Watson and his wife are staying with his nephew George.

What you might ask is the “East Wind?” In Sir Arthur Conan Doyle’s His Last Bow (published in 1917) the East Wind is first mentioned in an exchange between Holmes and Watson at the end of the short story:

“Good old Watson! You are the one fixed point in a changing age. There’s an east wind coming all the same, such a wind as never blew on England yet. It will be cold and bitter, Watson, and a good many of us may wither before its blast. But it’s God’s own wind nonetheless, and a cleaner, better, stronger land will lie in the sunshine when the storm has cleared.” 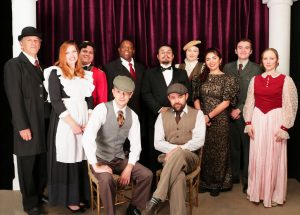 The wind Holmes refers to is a metaphor for The Great War, and much of the text I just quoted is incorporated in this Tucson musical. Yes, it is a Sherlock Holmes musical. I spoke to one theatre-goer who is not overly fond of musicals but he thought that music here was quite delightful, while another person thought the music was a bit out of place. Several songs are performed by the ensemble (there are a dozen cast members) but the most powerful delivery was from Luke Howell in his rendition of My Final Chapter. It is sung with the realisation that, with or without Holmes by his side, this murder mystery will be the final one of his career. Another great musical number features cast members Benny James and Michael Shipione in a philosophical interlude, Let’s Agree to Disagree.

Mention must be made of the attractive set, and the period costumes, both of which enhance the production.

Like all intricate murder mysteries, one can’t really do the usual type of review as revealing much of the plot would simply spoil it for those who want to see the play. Suffice it to say the play offers a delicious mystery with an American diplomat at the centre of it all. That role is based on the real-life tale of William Henry Hunt, an African-American diplomat who served in France and elsewhere in the early 20th century. He is played here with innocent wonder by Vernon Wilhite, who also has an excellent singing voice. “Words can change people’s hearts,” says the character Hunt. Listen carefully to the words of this play and it may have an influence on your heart too.

Lead photo: Dr Watson, in the tan jacket, looks at Mr. Hunt, who is seated at centre

The play runs through Oct. 27, 2019. The venue is the Arizona Rose Theatre in Tucson Mall, near Macy’s. Visit the website for details: www.arizonarosetheatre.com

To read my review of another Sherlock Holmes play, follow this link:

A Diverting Piece of Lunacy