There is nothing more delicious than an Agatha Christie murder mystery. I first attended The Mousetrap in 1978. It began a run in the West End of London in 1952, the year Elizabeth became Queen, and is still playing there 68 years later. A world record for any play!

While Mousetrap began as a radio play in 1947, Witness for the Prosecution has an even more noble lineage, having been written by Christie in 1925. It began as a play in London in 1953, and can still be seen there in a new production that started in 2017. It has spawned 2 movies (1957 and 1982), plus a BBC miniseries in 2016. Audiences in greater Tucson can now see this venerable murder mystery at the Gaslight Theatre in Oro Valley.

Being a mystery I can’t say much about the extended plot in order not to spoil the dramatic ending, but I can say it is well worth the wait. The Gaslight stage is cleverly divided. The first half of the play takes place in a small area to the right of the main stage, while the courtroom scene takes centre stage in the second act.

“The English judicial system,” pronounces Mayhew, “is the finest in the world.” Certainly true, but that does not mean it is immune to crafty manipulation on the part of witnesses who have a secret agenda. That discordant note is at the heart of this play.

Unlike many English murder mysteries, this one does not take place in a grand country house, and there is no gathering of the guests in the drawing room for a clever detective to ferret out the criminal. I can say without spoiling anything that the butler did not do it, because there is no butler. 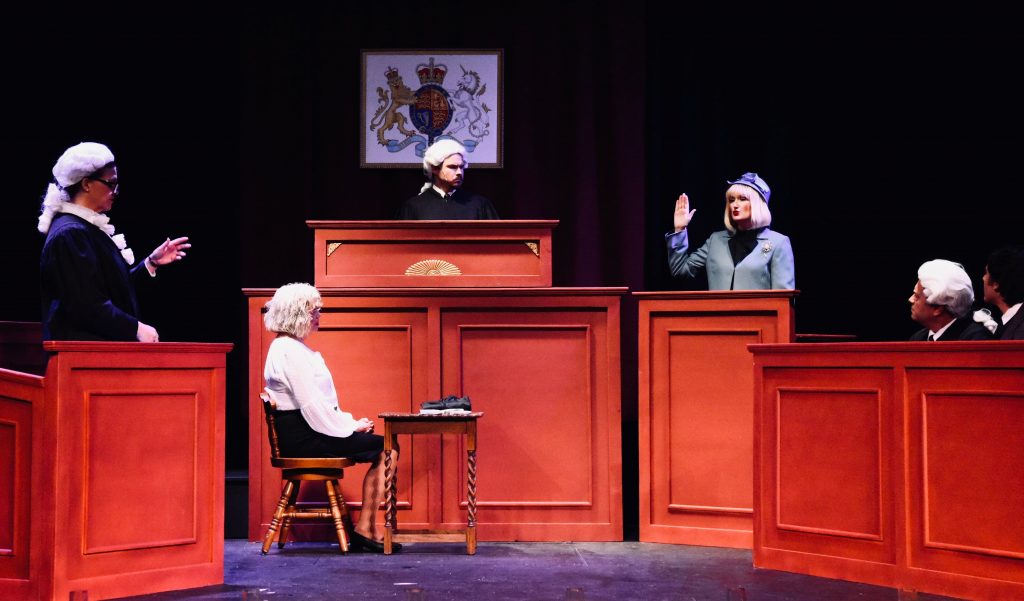 The closest we have to an aristocrat here is Sir Wilfred, a barrister who has been knighted by the monarch, and thus at the top of his profession. He has seen it all over a long career. Until, that is, he meets Vole and his European wife Romaine, played to the hilt by Ruth Ann Larsen. At one point Sir Wilfred makes a portentous pronouncement that Christie must have relished writing: “When truth is self-evident it speaks for itself.” This corker of a play tests that thesis to the breaking point.

From the self-righteous to the self-confident, each of the actors here play their roles to maximum effect. In addition to those I have mentioned, I include here Anna Hagberg, Robert Armentrout, Misti Nowak, Sindy Asbell, and Robert Armentrout as the judge whose patience is sorely tried by both the prosecutor (played by Jamie Price Walker) and a series of witnesses whose veracity would test the patience of a saint.

A very fine production (directed by Judi Rodman), it only has two more performances: Feb. 26 and 27. Definitely worth seeing in this second season of shows at the Gaslight in Oro Valley. Visit www.gaslightmusichall.com for tickets.

By the way, you can also eat at your table in the theatre; I recommend the pizza !

Court room photo courtesy of Gaslight Theatre. l to r: Walker as the prosecutor, Armentrout as the judge, Larsen in the witness box, Robarts and Acuna sitting.