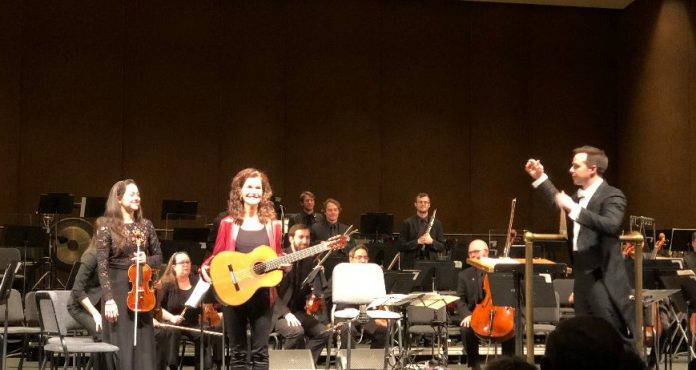 On the surface it appears the three compositions performed by the Tucson Symphony Orchestra this weekend have little in common. But perhaps inspired by Remembrance Day on Nov. 11, the first one (Prelude from Tristan and Isolde by Wagner) asks us to lament; the second (Troubadours by John Corigliano) asks us to remember; and the third (Symphonic Dances by Rachmaninoff) asks us to discover.

The opener by Wagner is easy to admire but hard to love. The last portion of this 17-minute prelude, first performed in 1859, certainly sweeps one along but one must endure a lengthy turgid section where the music slows to a complete stop.

Grammy-winner classical guitarist Sharon Isbin brought an entirely different mood to Troubadours, which premiered in St. Paul, Minnesota in 1993. Corigliano wrote this 23 minute composition at the behest of Isbin, whose talents are thereby showcased.

Like Star Trek: The Motion Picture, the main star of this composition is a cloud. It reminded me a review of the 1979 movie: “it takes an unconscionable amount of time to get anywhere, and nothing of dramatic or human interest happens along the way.” The music, especially in the first few minutes, was governed by the same acoustic approach as that taken in the film: quite fractal in nature and not at all pleasant to the ear.

A cacophonous passage is followed by a guitar solo which is certainly the highlight. Thoughtful to the point of being philosophical, its simplicity entreats one to ponder Platonic Forms, and perhaps even crystalline spheres as a few plaintive notes on the xylophone may herald someone knocking on one of those spheres from the outside!

But can one discern something in the primitive cloud Corigliano conjures up? At a certain moment the orchestra and guitar are in synch, and from then on they seem to agree on something. The harmonics are very hazy but the guitar snatches one statement out of the haze. Isbin uses it throughout the entire piece. She doesn’t know where she’s going with it, but the orchestra knows even less. Maybe the only ones who know where they’re going are the band members who perform off-stage, because they’re going nowhere. They are like a dopey bunch who don’t realise that something has happened to mankind, while the on-stage orchestra (reduced to a chamber orchestra) seems to show the advancing of mankind towards nothingness after some unseen apocalypse. But perhaps not towards nothingness: perhaps striving to reach a Platonic Form through the cloudy haze is the only hope left, a remembrance of an archetypal reality in the distant past when Man was one with the cosmos.

Guest conductor Case Scaglione described the 1941 Symphonic Dances (opus 45) by Sergei Rachmaninoff as “a wonderful tour de force: a raucous dance in the first movement, a lurid and sensual waltz in the second, and a virtuoso rhythmic exercise for the orchestra in the third.” He cautioned the audience not to applaud until the last note of the giant gong dies out, joking that the musician “spent four years at Julliard learning how to play this note, and I’d hate to interrupt his solo!”

Rachmaninoff’s piece is an exploration, so in that sense it is like the guitar piece, but it is a pre-meditated exploration. The ‘melody of discovery’ is expressed in the first movement: it starts with the woodwinds and proceeds to the violins. Whereas the guitar piece is constantly threatened by its seeming lack of intention, Rachmaninoff’s piece is threatened by a self-knowledge that reaches ecstasy, and almost destroys the structure itself.

The Tucson Symphony Orchestra did an excellent job exploring the many layers inherent in these three compositions, and guest artist Isbin performed beautifully. There is a second chance to catch this performance: Nov. 17, 2019 at Tucson Music Hall. Visit the website for tickets: tucsonsymphony.org.

This review was shaped in part by insight from local music expert Conlan Salgado. 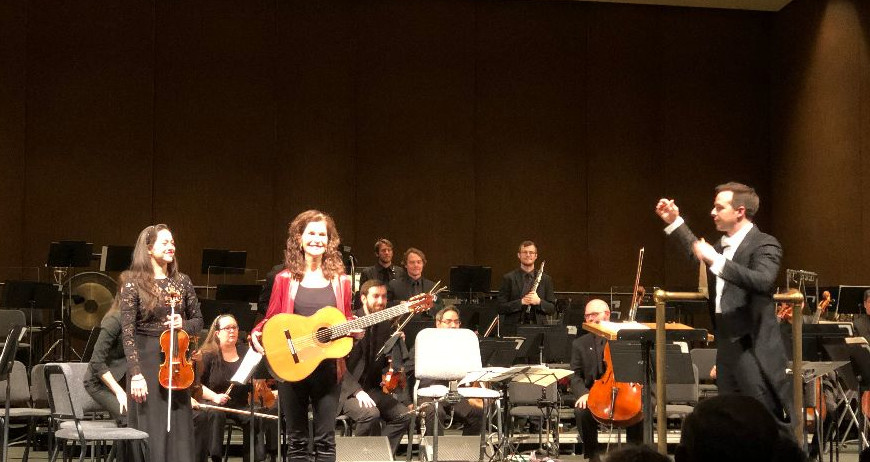