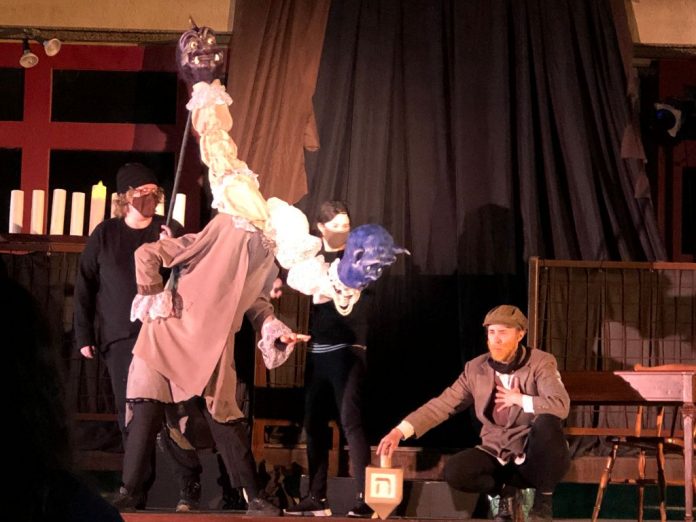 Scoundrel and Scamp Theatre adopts the same attitude as I do: Halloween Never Ends. It’s the first live production for S and S since March, and  is currently an outdoor event (schedule printed below).

It is based on the real-life character of Hershel of Ostropol (1757-1811), a jokster who hailed from Ostropol. It was then under the crown of Poland, but is now part of Ukraine. The play is based on a book by Eric Kimmel: on Nov. 29 he will joining the theatre in Tucson for a showing of the play (on screen), with the opportunity for audience members to ask questions. Also part of that event will be Shari Aronson, who adapted the text into this play.

One element that bothered some audience members was the fact that the male character of Hershel was played by a female, in the person of Leora Sapon-Shevin (who also directs the play). While her acting in the play was faultless, it was pointed out to me that in the Jewish faith women are not allowed to portray men on stage.

Be that as it may, what we have here is essentially a children’s tale that witnesses the conquering of evil (in the guise of several goblins) by good. Such moralistic tales have been the staple of children’s fables in Western culture for centuries, and this is a fine example which just happens to be keeping alive the Halloween spirit. Backed up by six actors who variously portray townspeople terrorized by goblins, and in different costume as the goblins themselves, this is a delight for the eye. Especially the four eyes of the two-headed goblin shown in the lead photo, which was an elaborate puppet requiring two people to handle. Quite delightful, especially fun with their silly voices.

If you want to relive childhood wonder, or perhaps treat your own kids, I highly recommend this play, especially important as it is now to support the arts in Tucson.

HERSHEL AND THE HANUKKAH GOBLINS

Two more dates in December may be announced soon! 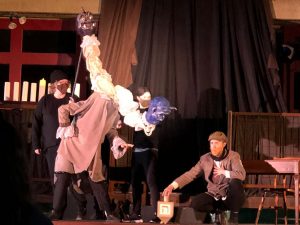