In the largest exhibition of his work in 25 years, Leon Polk Smith currently dominates the Phoenix Art Gallery. Polk, who died at age 90 in 1996, was a modernist painter and leader of the Hard-edge painting movement, an art form of the late 1950s and ’60s that emphasized geometric forms and bright colours. Much of that is in evidence in the 37 works on display, but some of his works from the 1930s offer a glimpse into his early career as well.

In a video interview for the exhibit that touched on Smith’s personal life, Patterson Sims, president of the Leon Smith Foundation said “Leon was always somewhat ambiguous about his Native American ancestry; his mother and father were both half-Cherokee, but two halves did not him whole. There has been a focus on Leon’s being a gay man who turned to abstraction as a way to not exactly cover that but just to rise above it.”

The title of this exhibit is Hiding in Plain Sight, as it attempts to explore the influence of American Indian creative expression on his work.  The exhibition pairs some of Smith’s paintings and works on paper with examples of American Indian beadwork, ribbon applique and painted hides from his native Oklahoma. They are represented in his artwork not in a direct, but in a general, way. 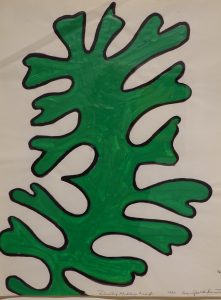 The exhibit is arranged in such a way that his art is displayed in the large gallery, but the Territorial artifacts are in a smaller room off to the side. Perhaps a more effective way to link some of the native American artifacts with the art was to have them side-by-side, although having all the artifacts grouped together better shows the potential influence of such designs on the young Smith, who grew up in Oklahoma. One example shown here is Dusty Miller Leaf (1953) and an undated skirt; whether or not one sees an influence in design between the two is up to the viewer. 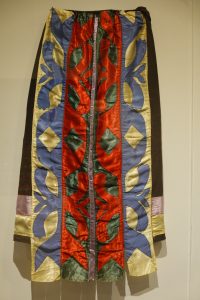 For most of the art on display, no attempt is made to link the abstract with the native American designs he saw as a youngster. On loan from the Brooklyn Museum is Lobster Red, while Constellation Yellow-Blue-Violet shown on its left is from the Smith Foundation. The former, while striking, is scarcely mentioned in the 191-page catalogue of the exhibit. The other, part of a series of works he loosely applied the title “Constellation” to, is linked in the catalogue to his broader interest in physics. “In outer space,” Smith wrote, “there’s really no left nor right nor up and down.” This concept is certainly linked to the Yellow-Blue-Violet piece, as its orientation in any given exhibit is not fixed. As Smith conceived them, the Constellations have no set orientation: they can just as easily be displayed at a 90 or 180 angle from what we see in Phoenix. As for the physics of this work, the catalogue essay by art historian Dana Miller writes that works such as Yellow-Blue-Violet’s partial geometry “activates a much larger field of play, as if they are exerting a gravitational pull to complete the image on the picture plane with the nearby wall.” She quotes Smith as stating “The energy is not all on the inside of the painting, some other energy is on the wall.”

When one looks at the geometric works on display, one can better understand Smith’s own explanation, where he described his “paintings all through the years have had the elements of other dimensions. I never think of any of my work as being three-dimensional. I think of it being of other dimensions.”

So whether you see representations of native American design, or dimensional space (as in the works of Ellsworth Kelly, a Ft. Lauderdale art exhibit I reviewed a few years ago), the art of Leon Polk Smith continues to exercise the imagination.

A 58-minute video discussion of the exhibit is at this link:

More about Smith can be found at: 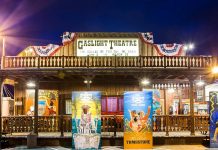