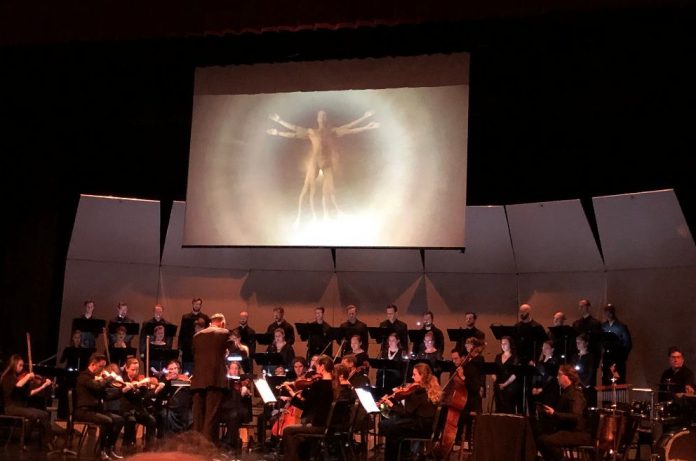 To mark the 500th anniversary of the death of Leonardo da Vinci, a multimedia symphony by Jocelyn Hagen is being performed across the United States this year. This audio-visual delight arrived in greater Tucson on Nov. 22 when True Concord under the direction of Eric Holtan presented it at the Sahuarita Auditorium.

In remarks that appear on her website, Hagen gives us an insight into her inspiration for creating The Notebooks of Leonardo da Vinci. “In the summer of 2016 I attended an exhibit at the Minneapolis Institute of Arts featuring da Vinci’s Codex Leicester.Seeing these pages with my own eyes cemented my devotion to developing this project. The liquidity of his mind and the way he connects disparate ideas as a means of understanding them is genuinely inspiring.”

“Because he was left-handed, his words and letters, written in vernacular Italian, are reversed. I imagine these beautifully scribed words scrolling above the musicians and adding a wonderful texture to the performance. Many sketches in the notebooks are of the human form, and will correspond perfectly to his observations on the proportions of the body.” This is shown in the lead photo, from the 5th movement of Hagen’s word, entitled Vitruvian Man. As the choir sings about the ideal proportions of the human body, the audience sees sketches of the human form overlaid on dancer Stephen Schroeder. The longest of the nine movements, it is also the most impactful, as we naturally relate most closely with ourselves. A 2-minute clip from Vitruvian Man is on her website (www.jocelynhagen.com/davinci/)

Other movements dealt with Perception (which featured closeups of an eye drawn by Leonardo and animated for the video), and Invention, which is the only entirely instrumental movement of the suite. It includes an animated image of his 15th century airplane, and engines of war as emphasized by the drums. A large screen above the orchestra  commanded great presence. This Arizona premiere performance is a fine example of what can be achieved with new video-syncing technology. 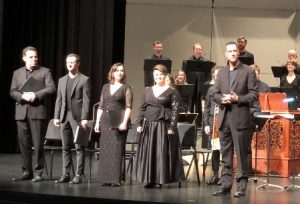 An entirely different treat, Mozart’s Solemn Vespers (K339), was offered in the first half of the concert. It featured vocalists Erika Burkhart (soprano), Kimberly Leeds (mezzo soprano), Patrick Muehleise (tenor) and Matthew Goinz (baritone). In the Vespers, Burkhart has by far the largest part of any of the solo singers. She has an especially fine solo in the third movement, and in the 5th her voice was as light as a feather, complimented by the very soothing voices of True Concord as they implore all nations to praise the Lord. The sixth and final movement, Magnificat, suitably begins with a full-throated opener from the chorus where they state “My soul magnifies the Lord.” The chorus and soprano take turns with lines about His mercy and strength, while all four soloists raise their voices in “Glory to the Father.” The integration of choir, orchestra and soloists was achieved with effortless grace by True Concord in this marvellous work by Mozart. An uplifting performance.

Dr. Theodore Buchholz, who plays the cello in True Concord, is also cello professor at the University of Arizona. He gave me some insights into this concert. “Most interesting is that there is a multimedia presence happening. The way it was composed with the visuals from the notebooks and the music leads to a really diverse experience. Different than, for instance, the Mozart which is a much more sonic experience. What does that mean for the performers? I don’t know how much that changes what we do. It’s just like we feel we’re in a different type of architecture, a different type of space, making this music in a different type of way.”

True Concord released its Christmas CD on Nov. 1, and it quickly went to No. 3 on Amazon’s new releases list. It will make a great present for the big day! 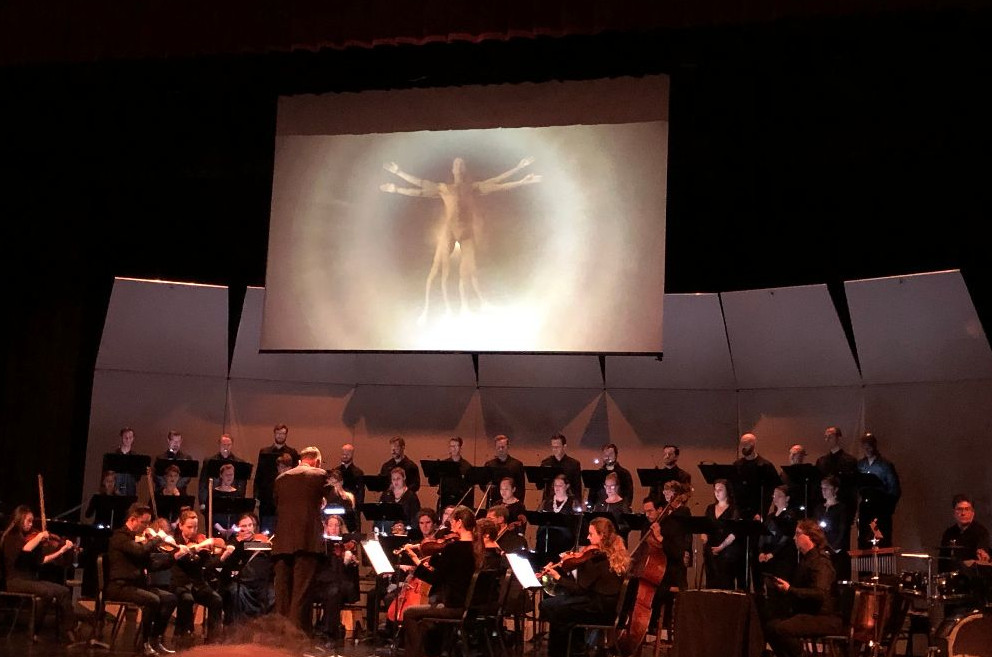 Forms in a Cloud