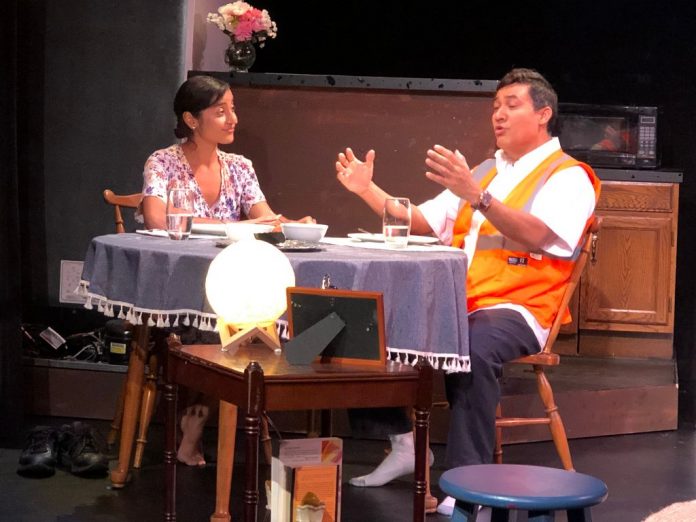 Anyone who has read about black holes in space will know that as you approach one, your flow of time stays the same but to an outside observer you appear frozen in time. In science fiction anything is possible, so here we have what appears to be a ditzy woman who generates her own personal time and space warping capabilities. She has no control over it, and is in fact completely oblivious to the flow of time. “Have I been here months, days?” Celestina asks Anibal, a baggage handler at LAX who brings her back to his place on a stormy night.

For him it really is just one night, but to the outside world 2 years pass. At one point Anibal asks her to wait a second. “I can’t wait a second,” she replies, “I don’t know what that means.” Whether consciously or not, the playwright is channeling the weird and wonderful that was embodied in The Twilight Zone TV show of the early 60s. Remember the clock in the opening credits? That is the clock that keeps time in Cloud Tectonics. It seems tendentious to even mention when the play was first performed, but the answer for those of us who do not live in the Twilight Zone is 1995. A line in the play is a better way to think of it: this is “an endless now.”

Celestina asks some weighty questions. “How do we know what time feels like? Where is time? Is the organ for time the heart.” In this play we can at least answer the third question in the affirmative. Despite issues of time dilation, this play is ultimately about love. This becomes apparent in the concluding segment, where we jump ahead 40 years.

Director Bryan Rafael Falcón made this point in a chat after the play. He is talking here about the image of a bed at the top of two ladders that is a constant visual metaphor behind the main stage. “So much of this play is thinking back to an ideal. The bed is an image of love but it’s very inaccessible. Why does love stop time? We don’t need to know, it just does.”

The interaction between Celestina (Azúl Galindo) and Anibal (Marc Pinate) is very tenderly done, and is due in part to the use of an “intimacy director” in rehearsal. “It’s like a fight director,” explained Falcón, which is used in action movies to make the scenes as close to realistic as possible. The intimacy director, he said “is there as an advocate for the actors.”

The cast is rounded out by Anibal’s buddy Nelson (Cole Potwardowski), who also has a romantic interest in Celestina (whose name evokes celestial awakenings). He provides the action and tension in the play, a role Potwardowski grapples with both hands. A moving performance.

Make time to go see this most unusual play.

Cloud Tectonics will be performed until Dec. 8 and the Scoundrel & Scamp Theatre 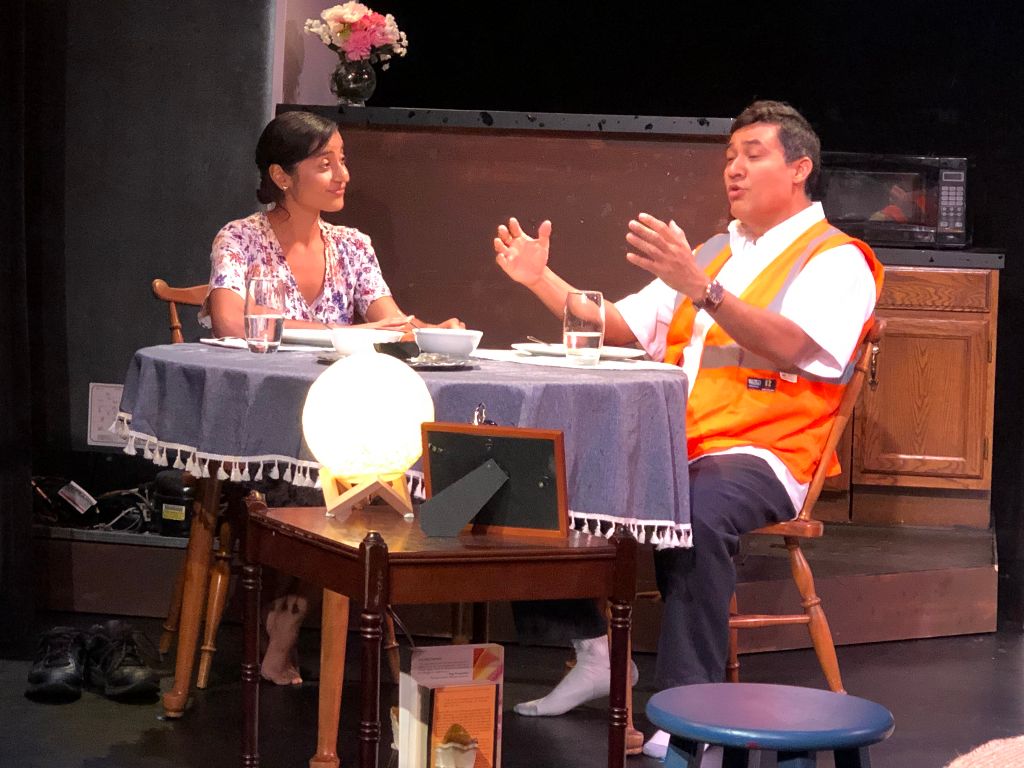